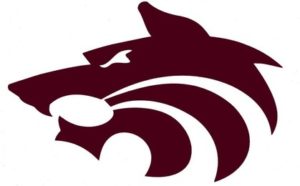 The CHS Wolf, courtesy of the CHS Alumni Society

Before I begin, let me say that I did not have a lot of school spirit when I graduated from Claremont High (CHS) in 1967.? For those of you doing the basic math, yes, it has been 50 years since my graduation.? I didn’t hate high school, but this was the late Sixties and California’s CHS students had a more blas? attitude rather than a rabid “rah-rah, go team” one.? We were the Wolfpack, which is a name I now like, but it wasn’t important to me then.? I was never in any sports, never on any student council, never held any class office.? I was very quiet then, rather shy.? While I had plenty of friends and was not a nerd, I was never a “sosh” or a “jock.”? However, I lost track of most of my high school friends when I went to college and then got married. 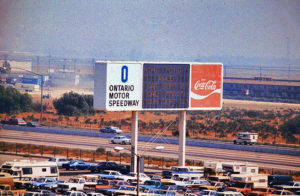 Fast forward to my 5-year high school class reunion.? I’m not sure to this day why I went.? It was held at a restaurant in the now-defunct Ontario Motor Speedway.? There is something apropos about that.? The snobs were still the snobs and none of my friends attended, so I ended up sitting at a table with people I didn’t even know.? It was like no one had graduated from high school.? The same cliques, the same pettiness.? I decided to never go again.

Fast forward to my 20-year high school class reunion.? My wife, who graduated from a different high school in the same year and been very active in sports and school activities there, was going to her reunion and encouraged me to go to mine.? Reluctantly, I did.? Surprise of surprises, I enjoyed it.? Some of my old friends were there.? Sure, not everyone was over high school, but enough were that it was a fun time.? For some reason, “Gloria” by Them was sort of a class song and when the DJ started the night with it, about everyone hit the dance floor.? It was like 20 years evaporated, but in a good way.

Fast forward to my 40-year high school class reunion.? Although I lived in NorCal, I was spending a lot of time in SoCal because of family and got on the reunion committee.? The chair was a woman who had been in one of my Latin classes in high school and we shared a few humorous remembrances of “dear days at Claremont High,” as is said in our Alma Mater.? I was the only guy on the committee.? When I told my best friend, whom I’d known since my freshman year at CHS, he said, “I hate those things.”? However, his wife put him in a full-nelson (figuratively) and said, “Your brother’s on the committee and you’re going.”? While we may not be biologically brothers, we are spiritual ones.? Anyway, we went and both had a great time.? Fewer people were living back in high school and most were just enjoying seeing people they hadn’t for 40 years.

Fast forward to my 50-year high school class reunion.? Wait, it hasn’t been ten years, has it?.? Five, maybe six at the most, right?? But who’s that old geek in the mirror with gray hair, a gray beard and lots of wrinkles?? Is that me?? Naw!? But it is.? And I was headed for the big 5-0 reunion.? Although I helped with some emailing, I did little for the reunion committee.? My best friend grumbled a bit about attending, but sent in his registration.? He said, “This is the last one.”? I told him, “You’ll go to the rest of them to see if you’re the last man standing.”? We both made reservations at what used to be the Griswald’s Hotel. 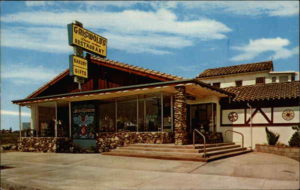 Griswold’s Smorgasbord in its heyday

Okay, here’s a rabbit trail, but it’s Claremont history and I’m a history buff.? Griswald’s had a smorgasbord buffet restaurant that had been the hot thing in the Sixties.? It had started as a fruit stand by college professor George Griswald (no, you Christmas Vacation fans, not Clark) in 1909.? In 1950, the Stanfords (no relation to Leland) bought it and added the smorgasbord and bakery that made it famous.? They later bought the old Claremont? High School when the school moved a few hundred yards north (it happened during my tenure there) and converted it to the “Old School House” with shops and restaurants.? Then they built a new hotel.? My wife and her parents stayed there the night before our wedding in 1971 and we had the reception there.? But Griswald’s got too ambitious and opened two more locations they were not equipped to run.? In 1992 they went bankrupt and now the Claremont hotel is under Hilton’s Double Tree banner.? Sic transit gloria mundi.? Roughly translated, it means, “so passes the glory of the world.”? Okay, since I took Latin for three years in high school, I had to show that I remembered a few words fifty years later. 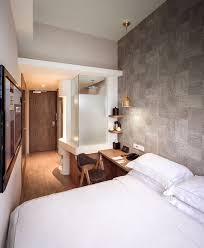 Not the real room, but you get the idea.

So, we checked into the Double Tree.? I’m not saying the room was small, but if you took two paces across from one side to the other, you’d bump your nose on the wall.? Especially if you’d had a glass or two of wine.? I know.? Just kidding.? But the small room did not damper the great time I had.? Although the hotel was a bit pricey for what it was, the event was not.? It was $100 for the weekend, which encompassed a Friday hors d’oeuvres party where everyone brought a food contribution with about 100 people crowding into an alumna’s house and backyard, a Saturday catered event with over 140 people that included a professional portrait photo and a gift bag with two 60’s music CDs, and a Sunday finger-food brunch with maybe 40 attendees.? Since I wasn’t there on Sunday, that’s hearsay.? But beer, wine and soft drinks were included in the $100!? Such a deal.? The committee deserves an award for getting the most cluck for the buck. 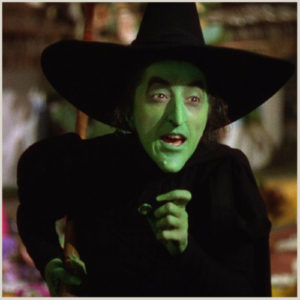 While this has been a rather long intro, let’s talk about the people.? I will use no names, mainly to protect the mostly innocent.? There was only one woman (who shall not be named, but was at the 5th) who seemed to still have her nose too high in the air to see the peons, but now she reminded me a lot of the Wicked Witch of the West in appearance.? Well, her skin wasn’t actually green, but . . . .? The rest of the alumni were there to reminisce and enjoy each other.? Let’s talk about my good impressions.

I talked to many people.? The football quarterback and the ’67 annual’s best “looks” guy were downright warm.? I knew them both, but we had never really been friends.? Now, I’m not saying we went up and hugged or anything like that, but we had nice conversations.? Something that would not have happened in high school.? I had a chance to have chats with people I had not seen in over 40 years, including one guy I’d? known thorough college with whom I had enjoyed engaging in theological discussions, but not seen since I was married in 1971.? He had recently retired as a Methodist minister.? He, like many, had traveled many miles to be there.? I spoke with so many about shared experiences and memories that I have lost track of the numbers. 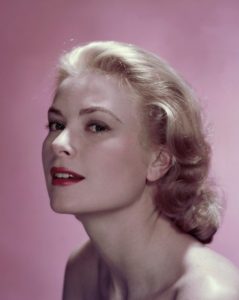 There is one meeting that I have to describe.? There was a woman there who had always reminded me of Grace Kelly.? While not a doppelganger, she had that same classic beauty.? But more than that, she had an inward beauty that made her just as wonderful to know as to see.? I can honestly say that I didn’t have some schoolboy crush, some weird fantasy we would get together and live happily ever after, but I did appreciate her beauty and enjoyed talking with her.? I wanted her to know that I and many guys in high school saw her that way, but how do you tell a woman that without sounding like some kind of perv or stalker?? Now I’m going off on another rabbit trail.

My wife and I went to her 50th in June of this year.? At our table was a guy who was probably 3 inches taller than I am and 100 pounds heavier, none of it muscle.? He was wearing a black suit, white shirt and black tie, improperly tied.? I do know how to do that.? He also had on a short-brimmed black straw fedora that he wore throughout the evening.? I see red when a guy wears a hat indoors, but I said nothing.? He had a cane and would walk across the dance floor, tapping his cane and forcing dancers to get out of his way.? That evening, he went up to one of the “popular” girls and told her, while her husband was not by her, that he’d been madly in love with her from afar all through high school.? Creepy.? She didn’t know how to respond.? I did not want my Grace Kelly from high school to think I was like that.

If you want to be sure that a woman knows you’re not “putting the make” on her, be with your wife when you talk to her.? Being married for almost 46 years, I was not going to take any chances on misinterpretation.? Actually, it was my wife’s idea that we go over to Grace Kelly, so I had double protection.? When I said the line about inward and outward beauty, a guy sitting at Grace’s table said, “Amen!”?? Well, maybe not that exact word, but he expressed that same sentiment. 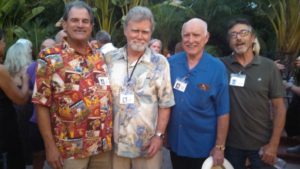 For the first time in many years, four of my group in high school that termed itself the Lost Patrol were reunited.? Since only one of them, my best friend, had said he was coming, the other two were unexpected and we had a great talk.? Sadly, one of our Patrol died in March of this year.? He had a lot of issues in high school and they only got worse over the years.? They became serious mental problems and I had not spoken to him in decades.? In some ways, it was surprising that he had made it this long.? It was a reminder of our own mortality. 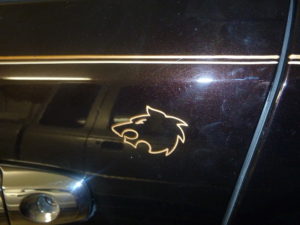 This is on the driver’s door of my Ford Explorer. Look familiar?

Remember I wrote that my best friend said he would not be going to another one after the 40th, but came to the 50th?? He volunteered to be on the committee for the 55th reunion.? It looks like we’re both going to be at that one, God willing and the creek don’t rise.? I hope even more of the class of ’67 make it.? Maybe the older you get the more important the memories of your youth become.? So now I say, “Go, Wolfpack!”