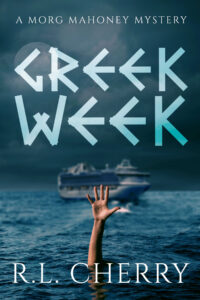 When Morgana Mahoney’s filthy rich best friend, Heather Pierce, persuades her to accompany her on a seven-day cruise to Mexico there is a catch. It is a reunion for a group of Heather’s sorority sisters from Sigma Iota Nu that she hasn’t seen since graduation and she wants Morg, as she’s known, there as support. However, she is not readily accepted by the sorority sisters since she’s not “Greek.” But when the husband of one of the sisters turns up missing, Heather persuades Morg to investigate. Did he fall overboard, jump overboard to commit suicide or was he thrown overboard? Enlisting the help of two eccentric, retired twin-sister actresses and a kindly Irish priest from the passengers as well as the ship’s buff Norwegian Security Officer, whom she mentally nicknames Thor, Morg sets out to find the true story. The deeper she digs, the more dirty secrets she unearths about the sorority sisters, their husbands and some very strange passengers, like a former porn publisher with a cruel bent, a violent bodyguard who claims to be a former Navy Seal and a pompous claimant to the Scottish throne. The only thing they all have in common is they are linked to the missing man. Motives abound, but the clues are often contradictory. Then Morg herself is attacked several times, both physically and more deviously. The question becomes can she find out what happened to the husband before becoming another victim during this Greek week at sea.

GREEK WEEK by R.L. Cherry is available for Kindle.