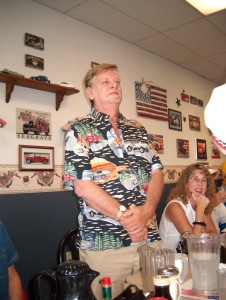 Mahlon Fawcett, who went by Lonnie, was a fantastic artist. He was also very witty, with an off-beat sense of humor, and was a pretty good impressionist, doing the voices of Cary Grant, John Wayne, Raymond Massey, Ronald Reagan, Humphrey Bogart, Peter Falk as Columbo and more. But most important for me, he was a very dear friend.

I met Lonnie in the early 1980’s. John, his brother, worked for me as a tow truck driver. Finding out that I had an interest in Sci-fi, John told me about Lonnie’s work and brought in a couple pieces to show me. For a year or so, John would occasionally bring in pieces Lonnie had done and I would buy them, thinking the money was going to Lonnie.

Periodically, he would bring in another piece and I would buy it. I kept asking John to meet his brother, but he said that Lonnie was a recluse who hated meeting people. Then, out of the blue, I got a call from Lonnie asking me to meet him. I went to his small trailer parked by his mother’s house, where he showed me more of his work and asked me if I was interested in anything. When I hesitated, he said, “Just give me what you think they’re worth.” That was Lonnie. He loved to draw, but hated marketing himself. As it turned out, brother John had told Lonnie I was making him give the art to him in order for him to keep his job, so Lonnie never got any of the money. But Lonnie’s phone call ended that scam. And, as Bogie said to Louis in Casablanca, it was the beginning of a beautiful friendship. Did I mention that Lonnie loved old movies even more than I do?

Over the years, Lonnie and I became good friends. He would come up to our house in Lake Arrowhead for our annual Christmas party. Although that has been many years ago, my mind wanders back to those parties and my friend who no longer celebrates Christmas with me. While he is no longer on this earth, I will not let him be forgotten. If you are on this website, in a way you’ve met him. He did all the banners for this website. His zany sense of humor and off-the-wall ideas come through them, as they often did in his work. Perhaps that limited the appeal of certain pieces he did. Yet he would do commissioned work, even Disney characters for a child’s room. He did great drawings of film notables like Jimmy Stewart, James Cagney, Basil Rathbone and even Harrison Ford for me that hang in my pool room.

Although he knew almost nothing about cars, he enjoyed doing caricatures of car people in their hot rods and classic cars at the annual Roamin Angels car shows and enthusiastically learned more about cars to be accurate. He loved drawing and would do almost anything requested. His passion was his art.

Lonnie spent time with us at our homes, first in Lake Arrowhead and later in Nevada City. I like to feel that we became the family he never had. When he came up to Lake Arrowhead for our annual Christmas party, he participated in the video-taping we did of spoofed commercials. He taped voice impersonations of John Wayne, Obi-wan Kenobi (Sir Alec Guinness), Humphrey Bogart and Alfred the Batman’s butler for our answering machine. He got to see snow for the first time at our house. His R2-D2 snowman sculpture was exquisite. When my family and I moved to the Isle of Man, my sister and her husband had a farewell party.  It was a nostalgia theme and everyone participated in lip-syncing to a ‘Moldie’ Oldie. I have a video recording of Lonnie mouthing the soprano solo of “The Lion Sleeps Tonight” with his group. I still laugh when I see it. When we returned to the States, moving to Nevada City, I became involved with the Roamin Angels Car Club. That’s when he started doing caricature drawings of cars with their owners, which were very popular. He would come up for the car show in September and stay with us for the weekend. It gave him a sense of validation to hear the praise for the drawings he did. For several years, it was a vacation for him. The only ones he ever really had. But it didn’t last.

To understand a person, know his upbringing. Lonnie’s father died when he was a teenager. His mother was an alcoholic. When he was an adult, she married a two-time convicted child abuser whom she chose over Lonnie. Then there was his brother, John, who had been telling Lonnie that I was forcing him to give the artwork to me to keep his job. His only romantic interest Lonnie married, but they soon separated and never met each other again. I have no idea who she was or where she now is. Out of this came a man who was kind and gentle, living to draw. Lonnie was a big man when we met, six feet one inch and maybe 230 pounds, but never used his size to intimidate. He was a gentle soul.  That was Lonnie.

Lonnie had no formal art training, but had natural talent and taught himself. His passion for his art knew no bounds. He would rather starve than forsake his calling. At times, he nearly did. I would give him money, but he always made sure he did something in return. Any idea of a picture, any concept I had of a drawing he gladly did. He gave as much as he received, probably more. He did drawings of me as the Crusader he loved, back against the wall, bloodied but not defeated. I asked him to do it after a trying day at work and it hangs on my wall in my home office now. He did Christmas cards with all the cars I owned over the years on them. Anything that I asked, he did and did well. He was a kind and generous man. 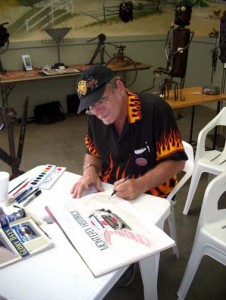 Lonnie doing what he loved most at the 2003 Roamin Angel car show: creating his art.

I tried to promote him and his art in any way I could. We went to a San Diego ComicCon in 1986, where he sold art at a table there. Unfortunately, people there were looking for comic books, not original art, so our sales were not what we had hoped. I got him a review by Disney Studios, which didn’t pan out for unknown reasons. I set him up with an interview with DIC Entertainment that went quite well. The very young executive we met with loved Lonnie’s art and described a new series that he thought Lonnie could do. Lonnie and I both were on Cloud 9 when we left. I kept telling Lonnie to do a follow-up call, but he felt it would be too pushy. Then, a few months later, the series came out without Lonnie’s art. I tell this tale to demonstrate two facts: I believed in Lonnie, but he did not have enough self-confidence to push open the doors. In retrospect, I feel guilt that I did not do more pushing for him because I could see he would not. If I had, maybe Lonnie would have had a successful career in animation. I’ll never know.

Lonnie and the ‘Thief’

After we moved overseas, things did not go well for Lonnie. He had his demons, mainly drink and tobacco. Drink cost him his place to stay and, maybe, along with his diet, his life. He did conquer alcoholism after becoming a Christian, totally abstaining. However, the long-term effects might have caused his diabetes. Tobacco kept its hold on him as long as I knew him, but at least he did not die of lung cancer.

Lonnie, bested by ill health and infection, ended up in an extended care facility. I watched as he deteriorated, finally ending up in a motorized wheelchair. Yet his mind and his talent remained alive. I visited him when I was in SoCal, taking him to breakfast. He relished the real eggs, sausage and hash-browns that he did not get “inside.” He talked about the art he did for people who lived with him or cared for him, being paid little or nothing. He taught kids how to draw, calling them his students. His goal was to inspire them with the same love of drawing that he had. And he did, a real success for him. Money was never the reason for his drawing, but rather the love of creating. Greed was unknown to Lonnie.
I was in France when I got a message on my home phone to call the facility where he lived. Because the facility only had my home phone, they had been trying to get me for a couple of days before I retrieved the messages. Lonnie had died on October 27, 2015, after an operation to remove one of his feet because of infection. Having been out of the country, I never knew he was going into the hospital. I was the only person Lonnie had given any authority to for his affairs and they did not know what to do with his meager belongings. Linda Gutman, a kind lady from his church, handled everything for me, even though she had not known him that well. She is a saintly woman.

After he had moved into the extended care facility, I had given him back a large number of the many panels I had purchased over the years. I had no place to display them and, rather than me sell them and keep the money, wanted to have him profit from his works. Sadly, he had entrusted them on consignment sale to Jim Van Hise who was, at best, very tardy on payments and who is now selling Lonnie’s artwork for which he never paid Lonnie a dime. DO NOT BUY THESE ON eBay!! If you love Lonnie’s work, I have his best pieces in my collection. I will make copies of ones I have and have you send the money to a charity he appreciated in his honor. I will only take the cost of reproduction and furnish proof of that amount. Contact me if you are interested.

In Memory of Lonnie

Lonnie is gone, but will never be forgotten. Hopefully, people who have his art will see him whenever they look at his drawings. Every time I sit in my office, working on my computer and every time I walk through the pool room, I remember him. While he never achieved greatness in the eyes of the world, he did in mine. And he was a good friend. Here’s looking at you, Lonnie.