Excerpt From The St. Christopher Murders: Chapter I 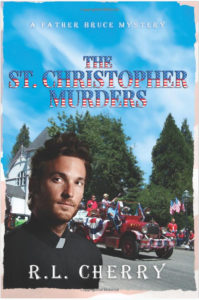 The Fourth of July in Buggy Springs was like something out of The Music Man. The Gold Rush era buildings were gussied up like brazen hussies, with red, white and blue bunting and streamers festooning the balconies and railings of the brick or wood buildings. People came from far away to see the annual parade, lining the sidewalks with their chairs hours before it began. It made me feel like I was living in 19th century Iowa instead of 21st century California. And I loved it.

Our local Celtic Society had just finished marching down the street, led by our pipe band consisting of a lone piper and a snare drummer. Although my father was not at all into such things and I had been named for my mother’s father rather than the fourteenth century Scottish king, I was proud of my Scottish heritage and regal name, Robert Bruce.

So I marched in my wool tartan kilt under the hot, California sun every Fourth. For me, it’s a chance to shed the clerical collar as rector of St. Nicholas of Myra Episcopal Church and just be a part of the festivities. We carried flags of the seven Celtic nations and our club banner, cheered on by the crowds. I doubted that they would have been so enthusiastic if Mikey Elliot had not piped us along. When he played the “Marines’ Hymn,” they went wild. Everyone loved the bagpipes.

As I wove my way through the crowd, heading up to the Victorian house at the top of the hill where one of our Society’s members hosted an after-glow party, I was sweating profusely in the 90-plus degree sun and looking forward to sitting in the shade with a cold glass of iced tea. Someone in the mass of people surging along the sidewalk bumped me and I almost fell over a man seated in a folding chair right at the curb. He was slouched in his chair and had a wide-brimmed straw hat pulled low on his forehead. I had accidentally knocked his hat askew.

“I’m so sorry,” I yelled, trying to be heard over the Buggy Springs fire truck that was intermittently hitting its siren. He didn’t react. I touched his shoulder and he slumped to the side, his hat falling to the ground, revealing a bloody hole in the middle of his forehead. His eyes stared sightlessly at the Buggy Springs High School float that was passing in front of him. A little blonde cheerleader on the float saw him, pointed and screamed more loudly than the siren. Cheerleading evidently did develop certain skills.

As soon as those around the dead man turned to look, they drew away in alarm. Some people ran into the street, blocking the parade. Others pushed back against those behind them, causing panic. A woman’s horse in our local equestrian unit, the Gold Rush Gals, was startled, rearing and knocking George Washington off a float. Fortunately, he was papier-mâché. The parade turned into pandemonium.

I made the sign of the Cross and whispered a prayer, but did not touch the dead man so that I wouldn’t corrupt the crime scene. I called Lee Garcia, the chief of Buggy Springs P.D., on my cell. He didn’t answer, so I left a brief message about finding the corpse and where I was. I was about to call 9-1-1 when the crowd turned.

Like at an accident on the highway, people lost the shock of seeing the dead man and started to gather around, talking and pointing. A short man in an American flag T-shirt tucked into his cargo shorts so that that his beer belly protruded like a pregnant woman’s, edged closer. In one hand he clutched a red, plastic cup full of an amber liquid. He pushed back the bill of his Giants ball cap and leaned over.

“What the crap happened to him?”

I couldn’t resist. “He had a killer of a headache.”

The guy looked at him, then at me. His eyes narrowed. “Funny guy. You kill him?”

I held out my hands. “Nope. No gun. Just stay back until the cops get here.”

“You gonna make me?” His chin jutted pugnaciously forward, no doubt fueled by too much beer, as he slowly reached his free hand toward the dead man. Buggy Springs allows alcohol consumption on the streets, as long as it’s not in a glass container. Perhaps it’s a throwback to the rip-snorting days as a gold mining town, but some people abuse the privilege.

I brushed his hand away. “If need be. Don’t touch him.”

A 6’2” guy in a kilt, just under 30 and in good condition, must have been intimidating, because he mumbled a few obscenities and something about a “queer in a skirt” before shoving his way through the gathering crowd, sloshing beer as he went. Hopefully, the chamber of commerce would never hear of my inhospitable attitude, but in light of his bigoted comment, I didn’t care. Fortunately, I heard the Chief’s voice before I had another run-in with any of our tourists.

“Step aside. Step aside.” The Chief, a stocky guy in his late 50’s with a little grey in his thick black hair and Pancho Villa mustache, pushed his way through the onlookers until he reached me and saw the body. “Move back, everyone.”

Some people refused to budge, fascinated by the macabre scene. The Chief, dressed in a short-sleeve uniform shirt and blue shorts, put his hands on his hips. “I must warn you that anyone who is even close to touching the victim will have to be processed by Buggy Springs CSI and that could take an hour or three.”

Everyone moved far back from the dead man.

I raised an eyebrow as I stared at the Chief. “Buggy Springs CSI? Give me a break.”

“So, I exaggerated,” he said under his breath with a wry grin. “But it worked. How did you get involved with this? I’d have thought you’d seen enough murders for a lifetime last Christmas.”

“I sort of stumbled over him.” I caught the Chief’s questioning look. “Really. I was trying to get through the crowd and got bumped into him. I don’t recognize him. Do you?”

The Chief shook his head. Two more Buggy Springs P.D. officers made it to us. They were a tall, thin young man and a petite young woman.

“Get these people as far back as possible,” the Chief told them. “Jolene, radio Tim to get some crime scene tape and put it all around here. Then call for the coroner.”

The officers stood, staring at the body. The Chief snapped his fingers to get their attention. “You hear me?”

They both nodded. The woman got on her radio and the man started to push people back.

The Chief rolled his eyes. “They wouldn’t survive a week in San Bernardino.” Then pulled blue latex gloves from a pouch on his gun belt and snapped them on. Obviously, there was no need to check for signs of life, so he checked the man’s pockets and came up with a wallet. He opened it and pulled out a driver’s license.

“Richard Adam Woodbead,” he said as he studied it. “From Granite Bay.”

Richard looked to be in his mid-to-late 60’s. He had been a trim man of medium height, a classic Greek nose, and clean-shaven with carefully-groomed grey hair. His white Polo-logoed shirt, creased khakis and expensive-looking gold watch with a little map of the world on the face bespoke of wealth. Blood had congealed around the bullet hole in his forehead.

The Chief leafed through his wallet. “Lots of credit cards, but no cash. This could have been a robbery, I guess.”

“Probably not, with the expensive rings and watch he has on. But how did he get here in the first place? I mean, was he shot here or shot somewhere else and put here? And why here, in the middle of our parade?”

The Chief shrugged. “You tell me and we’ll both know. I’m just starting my investigation.”

He paused, staring at me. “Notice I said my, not our, investigation.”

After giving a non-committal shrug, I made the sign of the Cross and was saying a silent prayer when something caught my eye. It glinted on the dead man’s shirt and I automatically reached for it. The Chief grabbed my hand. “Don’t.”

“Sorry. I just wanted to see that. I think it’s a St. Christopher medal.”

The Chief picked up the small, oblong, silver disc that hung on a chain around the man’s neck and studied it. “Yeah, I’ve got one of these my mother gave me. Supposed to keep you safe, isn’t it?”

“St. Christopher is the patron saint of travelers. The medal is thought to help keep them safe.”

The Chief looked down at dead Richard. “Didn’t help him much, did it?”

I studied his body. “Maybe not, but there’s something odd.”

I pointed at the medallion. “It’s on the outside of his shirt”

The Chief cocked his head. “So?

“When you’re wearing a St. Christopher, it should be under your shirt. Someone pulled it out or put it on him after he was killed. Either way, it could be significant.”

“Whoa.” He stepped back. “I already told you this is not your investigation.”

“Think about it, Chief. I found the body and the medallion. Like you said, it didn’t save poor Richard, but St. Christopher would want me to help find Richard’s killer. I can be your consultant on church matters. Besides, you wouldn’t want to make a saint angry, would you?”

He sighed. “Robert, you’re lucky I like you. Okay, just don’t get in the way.”

He snorted, then turned to the arduous task of getting a dead body removed from the sidewalk and bringing order to chaos on a disastrous day.