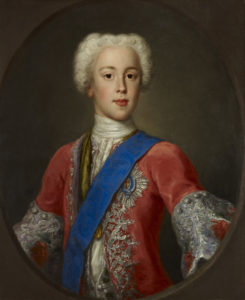 Let’s start with the apocryphal history of the Kirkin’ of the Tartan (a.k.a. the Kirking of the Tartan or the Kirkin’ o’ the Tartan). In 1745, Bonnie Prince Charlie, the son of the claimant to the British throne, James III, or the Young Pretender) led a revolt against the Hanoverian king, George II. While I could write a lot about how this French-born usurper used the Scots for his own purposes, that is another topic entirely. (click here for more on Bonnie Prince Charlie) The relevant fact is that Charlie failed and many of his Jacobite (a term derived from Jacobus, Latin for James and the name of Charlie’s father, grandfather and great-great-grandfather) followers died at Culloden, Scotland, on April 16, 1746. In the aftermath, the Proscription Act of 1746 had several parts, including banning Highland dress (kilts and tartans) and owning weapons. As a side note, it is oft said that the bagpipes were banned as well, as a “weapon of war,” but there is nothing mentioned about them in the Act, nor any historical record of this. (click here for Act) But it was a time of oppression for many Scots and the fracturing of the clan system. All this is authenticated history.? Now we get into the not-so-factual part.

The story is that the Scots would hide a swatch of tartan cloth and sneak it into the kirk (church) each year around St. Andrew’s Day (patron saint of Scotland) to be blessed. the term “kirk” is the term used by Scots for a Church of Scotland (Presbyterian) church. After 1782, the Proscription Act was repealed, so the Scots could openly wear their tartan kilts without fear of arrest. However, there is no record of this Kirkin’ of the Tartan ever happening until the early 1940’s in America. That was when the Rev. Peter Marshall, the pastor of the New York Avenue Presbyterian Church in Washington, DC, and an immigrant from Coatbridge, Scotland, preached a sermon entitled “the Kirkin’ o’ the Tartans” and the legend was born. (click here for more on Peter Marshall) It was either in 1941 or 1943, depending on your source. Ironically, most of Bonnie Prince Charlie’s army were Episcopalians and Roman Catholics rather than Presbyterians. However, Rev. Marshall inspired Americans of Scottish descent to honor that supposed tradition and the Kirkin’ service spread like wildfire. This year, Kirkin’s will take place all over America and Canada, as well as Australia and New Zealand.? Rumor has it that they will also happen in Scotland, but I have not been able to authenticate this. If so, it would be ironic that an American invention of Scottish history was imported to the homeland. 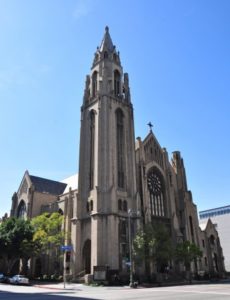 Does the fact that the Kirkin’s themselves were not historical make this ceremony something to be shunned? Not at all. The honoring of our Scottish ancestors and acknowledging the actual oppression they endured is a fine tradition. I have been an active part of many through the years, including huge ones at Immanuel Presbyterian Church on Wilshire Blvd, L.A. Actor Hugh O’Brien (Wyatt Earp on TV) spoke there. It was even televised on network TV. These services play an important role in keeping our Scottish heritage alive. Much of what we think we know about Scottish history and traditions are, shall we kindly say, doctored. That is true for every culture. Since this is about the Kirkin’, I will not go into anything but the Scottish one, but romanticizing the past has been done as long as there is recorded history and, no doubt, before.

Since traditionally the Kirkin’ should be held around November 30th, St. Andrews Day, let’s consider this patron saint of Scotland. Why was that honor given to him? St. Denis is the patron saint of France. He was the bishop of Paris in the time of the Roman Emperor Diocletian and was beheaded for his faith. St. David is the patron saint of Wales and was a 6th century Welsh monastic known for his holiness. St. Patrick is the patron saint of Ireland and was the man who had the greatest influence of converting Ireland to Christianity. So shouldn’t the patron saint of Scotland be St. Columba (click here for more on St; Columba) or St. Ninian (click here for more on St. Ninian), the two men accredited with bringing Christianity to Scotland, right? Wrong.It’s St. Andrew, the fisherman disciple of Jesus and apostle of the church. Church tradition has it that he was crucified on an X-shaped, or “saltire,” cross in Patras, Achea, date unknown. According to legend, he preached in Fife, Scotland, or his bones washed ashore in the 4th century and were enshrined in St. Andrews, of golf course fame, but were lost during the Reformation. Another legend is that 9th century King Angus saw a sign of clouds in the sky of a Saltire Cross, much like the sign seen by Constantine before the battle in 312 A.D. that made him Emperor, and Angus went on to beat the Saxons in battle. In other words, St. Andrew has no factual tie to Scotland, but made a reputable patron saint since he was an apostle. In 1286, it was used on the seal of the Guardians of Scotland and in 1385, the Saltire Cross is finally mentioned in an act of the Scottish Parliament. The rest is legend, and not of the highest credibility. (click here for more on St. Andrews) A bit like the Kirkin’ of the Tartan. 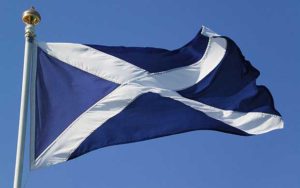 So I am proud to take part in this Scottish-American ceremony. On Sunday, November 19th, the Gold Country Celtic Society in Nevada City will be holding our Kirkin’ of the Tartan at Trinity Episcopal Church and I will be at the fore as chief of the Society. Let the purists criticize, but if not for such traditions, however recent in origin, much of the the real history of my Scottish ancestors might be forgotten.