Back in 1995, when I was living on the Isle of Man, I was able to interview George MacDonald Fraser (click for more info).? I was the vice-chairman of Clan Fraser Society of North America (even though I had moved to the Isle of Man) at the time and did so for the newsletter.? One afternoon, my wife and I met with him at the Sefton Hotel on The Strand in Douglas, across the street from the harbor.? We had tea and I interviewed the author of the Flashman novels (click for more on Flashman), several semi-autobiographical books about his experiences in Southeast Asia during World War II (click for a synopsis of one) and histories (click for a review of one).? The chairman of CFSNA was a big fan and, although I was not that familiar with his works, I read some of his books and studied up on him before the interview.? I was impressed with his writing and, as I interviewed him, the man.? He was most gracious and interesting.? Here is the first part of my interview with the late George MacDonald Fraser.

RLC: You have written fictional books and short stories, history, reviews, magazines articles and even worked for Hollywood. Do you have any favorite type of writing?
GMF: I would say the short stories are less trouble than anything else because I don’t have to do any research. And the same holds good for the film scripts. Again, very little research is necessary, and you can just sit down and do it, you know?? The Flashmans take an awful lot of reading and research in advance.? Naturally, any historical novel does.? But I wouldn’t say that I have any particular favorite.? No.
RLC: You worked as a newspaperman in Scotland as one of your notable jobs.? What was your most memorable story or event of this time of your life?
GMF: I think interviewing Oliver Hardy, because he was such a nice man, and exactly as I had imagined and exactly as he was on screen, sitting there in his bowler hat, looking rather weary, which he probably was.? Oh, I can think of things in Scotland when I was deputy editor of the Glasgow Herald, we effectively dealt a blow to Scottish nationalism,which I don’t approve of, although I’m getting more and more sympathetic to it as time goes by, and that was a great satisfaction at the time.? No, no particular stories.? How long have you been here?
RLC: We moved here in November.
GMF: Oh, I see.? Then the name Bill Shankly won’t mean anything to you.? He was a famous football manager with Liverpool.? I mean, he had this sort of reputation in Britain that Casey Stengal and people like that used to have in the United States.? When he managed a very small club I happened to be covering it for my local paper and I got to know him extremely well.? I discovered that of all the people that I have met, he is the one whose name, when dropped, excites the most offense.? Particularly in the north of England. 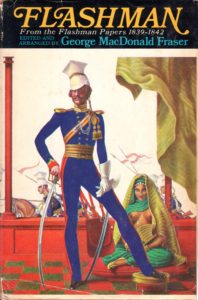 RLC: Mentioning Flashman brings me back to the book. It was my first introduction to your writing.? It was a very interesting book. The first time you pick it up and you start reading about this fellow…very unique.? Probably the most famous anti-hero in literature, I would say.? Aside from the fleeting description in Tom Brown’s School Days that you attribute this character to, how did you become inspired to create this fellow, who is the ultimate in self-interest?
GMF: I don’t know.? I know I wanted to write a Victorian novel and I ‘d had the thought, I don’t know when, probably when I read it when I was about twelve years old, “What happened to this character.”? In a sense the work was done for me because it’s clear from Tom Brown’s School Days when he was expelled from Rugby, in the late 1830’s.? Right. ? What would he do? He’d go into the army.? What was happening in the military world at that time, and so on.? So it was just a question of fitting him into history, which is what I’ve been doing ever since.
RLC: Having read them, I’ve found them to be full of detailed descriptions not only of points in history, but also locations, such as Afghanistan during that period and the Civil War period in America with Custer and the gang.? The incredible amount of research in there, obviously.
GMF: That’s the best bit of it.? That’s the best part.
RLC: What I noticed in that is there are certain times the characters become very alive, and sometimes in a negative way.? Custer and Elphey Bey and such.? You see them as pompous fools and idiots?
GMF: Well, an awful lot of them were, you know.? Or so it appears now. Yes, I suppose all the great names of history have their weaknesses and their follies.? An awful lot of history is as incredible as fiction.? You wouldn’t get away with it as fiction.? That, as I say, is the fun in finding out, and finding out, where possible, the real truth behind the legend.? You know, just the small facts and the small details.
RLC: Yours, of course, are considerably more fleshed out than you can find in history because that is the nature of fiction.? If you just had a dry recitation of facts it would be quite boring.??????????????????????????????????????????????????????????????????????????????????????????????????????????????????????????? GMF: That’s right. You have to have Flashman in the middle of it, you know.
RLC: How much freedom do you feel to make someone like Elphey Bey or Custer more fallible than they were or do you try keep-
GMF: I try to keep exactly as it was.? There is only one person I am conscious of perhaps having made out to be a bit more of a villain than he was, and that is Bismarck.? And yet, he was a thorough swine.? There was a Russian called Ignatiev (Count Nicholas Pavlovich Ignatiev, statesman and diplomat) who I may have been a little unfair to, but that’s all.? I will not, in any circumstances, take liberties, particularly with female characters. Unless they were promiscuous I won’t say they were.? I won’t attribute misbehavior to any historical female who wasn’t guilty of it.
RLC: Now, I have noticed in your Flashman books quite a few characters who sound very historical.? Do you bring in what I would call minor historical characters that people might not even have heard of that you encountered in your research?

GMF: Oh, yes.? When I did the one before the last one, Flashman and the Mountain of Light, I discovered, about the Sikh War in the 1840’s, these two American adventurers of whom I had never heard.? Incredible men upon whom I am convinced Kipling based The Man Who Would Be King, because their careers are so parallel and the timing is right.? One of them published his memoirs in 1891 (extracts from Gardner’s journal were published in 1853 and Harlan published his in 1842.? Both men died in the 1870’s.) and Kipling produced The Man Who Would Be King five years later.? I’m quite sure he was inspired by them . That kind of character, this man Gardner (Alexander Gardner-click for more on this adventurer) who came from Wisconsin and went about Afghanistan dressed in a full suit of tartan including a tartan turban.? I mean, there he is, and there’s a photograph of him, God help us.? And another, a fellow from Philadelphia (Josiah Harlan-click for more info on his incredible story), who made himself, very briefly, king of a tiny Afghan kingdom.? That is where, I’m sure, Kipling got the idea.? He didn’t last long, and ended up as a dentist in San Francisco, as far as I remember.? But an astonishing career.? There were some very hard fellows about in the last century.? (Some sources consider Sir James Brooke to be one of the inspirations rather than Gardner- click for more)
RLC: One of the things that is very obvious is that Flashy always comes out ahead, in spite of what you would think were some very grave errors of judgement where you think he would be branded a coward.? You always make sure he has an “out.”? How does this inevitable survival of such a person reflect your attitude toward this sort of real life individual?

GMF: I think they do.? I often wonder how many great reputations are genuinely earned.? The more you look into historical characters the more faults and the more virtues you find.? You generally find, this is my experience, anyway, that where there is a myth, so-called, there is a genuine basis for it.? I mean, everybody knows about Custer.? They may not know all the facts and all the details about Custer, but he wasn’t a bad sort.? He made a terrible mistake.? And it was a mistake he could have attempted to justify, because he had done the same thing before and it had worked.? But at Little Big Horn it didn’t.? What is not generally known about Custer is his political ambitions, that he genuinely had his eye on the Democratic nomination.? And he hoped in the far West, in the Little Big Horn campaign, hoped he would win such a glorious reputation that it might see him not only into the nomination, but into the White House.? And God knows, why not?? It happened to Eisenhower, you know. I suppose it happened to Andrew Jackson.
RLC: And even Washington.
GMF: And Washington, quite.? What Custer would have been like as president, God alone knows.? Because he was a pretty hysterical character, or very emotional, anyway.? I don’t think he would have been a great success.? Mind you, I’m not sure who became president that date, after Grant.? Johnson?? No, Johnson was before that.
RLC: After Grant was, ah….??????????????????????????????????????????????????????????????????????????????????????? ? ? ? GMF: What was the one that was assassinated?
RLC: That was McKinley.
GMF: Wasn’t there one who was assassinated around about 1881????????????????????????????? RLC: Garfield. After Garfield was Arthur.
GMF: Was it Arthur?
RLC: Chester A. Arthur was later. Then you went to Cleveland, then Harrison, then Cleveland again, and come to McKinley.
GMF: Early 70’s.
RLC: Tilden ran against him, ah….
GMF: Tilden.? That’s a name that rings a bell.
RLC: They made a deal.? Actually the Democrats had the majority in the election and they made a deal with Republicans that they would get the White House in exchange for pulling out the occupation troops in the South…Lemonade Lucy was his wife…I’m into history and it’s like all of a sudden I can’t remember anything.? I hate that.
GMF: I know that Grant was still President.? Grant did two terms, if I remember.? And I think he was just about going in ’76.? That was just about the end.
RLC: Lincoln won in ’64.? After him, up to ’68, was Johnson.
GMF: That’s right.? Through ’72 and ’76 was Grant.? I don’t know who it was from ’76 to ’80.
RLC: If I don’t think about it, I may come up with him.? That would have been interesting, Custer as President.