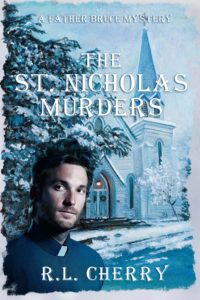 The first of my Father Robert Bruce mysteries, The St. Nicholas Murders, will be out in a few weeks. Unlike so many crime-solving priests in novels, Father Robert Bruce is young, fit and handsome.  As an Episcopal priest, he can marry, although he hasn’t thus far.  This makes him the target of matchmakers and lonely women.  When a strange phone call leads him to think a murder has been committed in his small town, he starts investigating.  It is a cozy mystery, which is normally defined as a mystery that has no graphic sex, violence or language.  The crime-solver is an amateur, but normally has help form a professional detective or law officer.  That’s what happens in this book and the law officer is none other that Lee Garcia, who made a brief appearance in the last Morg Mahoney mystery, It’s Bad Business, as a detective in Colton P.D.  He has since retired to the Sierra Nevada Foothills, where he has taken the job of chief of police in Buggy Springs, CA.  More also plays a part in Father Robert’s investigation, but this is not her tale.  It is Father Robert’s, the rector of St. Nicholas of Myrna Episcopal Church in Buggy Springs.

Never heard of Buggy Springs?  That’s because it is based upon Nevada City, which is also in the Sierra Nevada Foothills.  While the book is fiction, places in the book were inspired by living here and people I have met, not only here but throughout my life, influenced characters in the book, but there are no carbon copies.  If you’re too young to understand that term, Google it.  All names of people, places and things have been changed to protect the guilty.? What I’m saying is that no one in the book is a real person except for Blue, a.k.a. The Dude.  He’s my Aussie and has given full permission to use him in the book as long as I give him doggie treats every week.

Take a look at a few chapters on this website.  This story ends on Christmas Day, so the St. Nicholas title refers not only to Father Robert’s church, but the holiday. Hopefully, you will like what you read enough to get the whole book, either in hardcover or Kindle.  Amazon will be carrying it.  The next in the series, The St. Christopher Murders, is already written and going through multiple editing.  It starts at a Fourth of July parade in Buggy Springs.  Stay tuned.