Discrimination on the basis of race, religion, sex and much more is illegal and violations are often front-page news. Legal action and lawsuits often are the results of such discrimination. But ever hear of widow discrimination?No? It does exist. It happened to my sister and pretty much no one cares. But I do and that’s why I wrote this post. 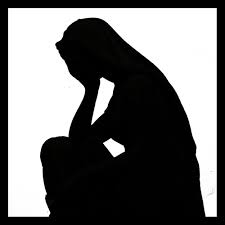 In February of 2018, my sister lost her husband, her mate for over fifty years. The trauma and heartache of that cannot be over-emphasized, but that is not the issue here. The financial hassles she encountered as a widow are. They had prepared for such a tragic event with all the financial planning that they knew about. They had a family trust and will in place. Having sold a successful business and invested wisely, financial security was not a problem. Everything legal and financial should have gone smoothly as my sister coped with her loss. Such was not the case. It is a long and rather Kafkaesque tale. (click here for a definition)

As a little background, when a husband and wife apply for a credit card or open an account such as for cable or satellite TV service, utilities, trash collection and such, the provider asks for a social security number to do a credit check. Normally, the husband gives his. If the bills have been promptly paid, transitioning the accounts to the widow should not be an issue, right? Wrong, as my sister found out the hard way. 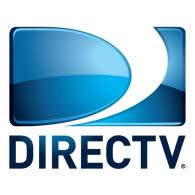 Let’s start with DIRECTV.? In April after my brother-in-law’s passing, my sister found the bill for DIRECTV, which was on automatic pay with Mastercard, had almost doubled. She called them and they said it was because they had signed up for a special promotional that gave a reduced rate for extra channels for three months. After that, the rate would go up to the regular one unless the extra channels were cancelled. No problem, she said. Just cancel the extra channels. While she would have one month of the higher charge, it would only be for one month. No, they told her, you cannot change the service since it is in your husband’s name. But he has died, she told them. Oh, they told her, then we are cancelling your service as of midnight today. She asked them, why can’t I continue it in my name? You can’t, they said. You’ll have to apply for a new service in your name and it is for a minimum of two years. No thanks, she said. Since they were cancelling her service, she assumed they would cancel the automatic billing. Not so. When her card was charged the next month, even though she had no service, she called them again. They would continue charging her card with no service until she sent a death certificate for her husband as well as jump through a few more hoops. In other words, they would keep charging the card even though she was receiving nothing for it! In my book, that is termed robbery, taking someone’s money against their will and giving nothing in return. Instead, she went through Mastercard and disputed the charge as well as having them cancel the automatic charge to her account. She was planning to sell the house, but did want to watch TV until she did, so she had an antenna installed to be able to watch a few channels until she moved. It was a lot cheaper, too. For some reason, she has decided never to use DIRECTV again. 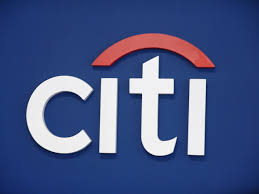 Since she had credit cards with her name on the cards and paid all bills for them on time, my sister continued to use them after her husband died. She assumed that, like her bank account, they had been joint accounts. Wrong. Shopping at Costco over a year after her husband died, the Citibank Visa card that is the only one Costco accepts was denied when she tried to use it. Customer service told her that her husband had cancelled it! Huh? Did he call from heaven or write to do so? If it were the latter, the stamp on the envelope would have been a real collector’s item. Then, when she tried to use her Citibank Mastercard in another store, it was denied. When she called to find out why, Citibank told her she would have to apply for new cards that were not connected with the old ones. So she did. She received a reply that they were denied. It had nothing to do with her credit, which was excellent, but was because she applied for both of them simultaneously. So she applied for one again and waited six weeks to apply for the other one. She did receive the cards, but with one fifth of the old credit limit. Since her income alone was the same as it had been for both of them, they claimed it was due to lack of credit history with them. The original cards’ credit histories were completely ignored. But at least she had credit cards again, this time solely in her name. 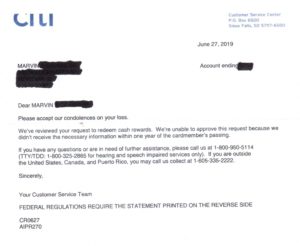 Then came trying to get money due her from Citibank. The Citibank Mastercard she and her husband had used had a double cash-back reward. However, you had to request the reward check from Citibank. Back in August of 2018, while she still was using the card, she had requested it online and it was sent to her. No problem. When her card was cancelled in April of 2019, she called Citibank to get the final cash-back reward for the closed-out account. They told her they needed an original death certificate, letter to show that she was the executor of the estate and the address where to send the check. She did so. 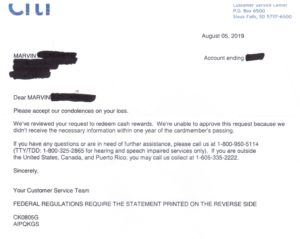 Second letter from Citibank Mastercard, again addressed to her late husband. Date was changed to protect the guilty?

In June, she got a letter back, addressed to her late husband with condolences for his loss that stated they could not approve his request because they did not receive it within a year of the cardmember’s passing. She called them and explained the whole situation, how she had continued to use her card since it had her name on it, how she was never told that it was necessary to inform them within a certain time, etc. She said she would never have continued to use the card if she had known there would be a problem. She also said receiving the letter addressed to her late husband was very upsetting. The man on the phone was very understanding and apologetic. He sent in a request for payment along with telling of the mistaken addressee. A copy was to go to management. 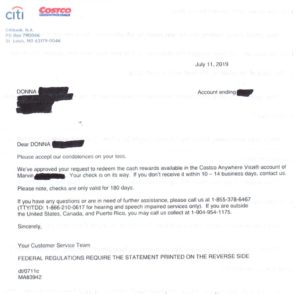 In July, she received a letter from Citibank regarding the Costco Visa card cash-back reward that was correctly addressed to her with condolences for her loss and a check.Same bank, different credit card. That led her to believe that the matter was settled and she would then receive another check from Citibank Mastercard. Wrong.Instead, she received the same exact letter denying her request and again addressed to her late husband! the only difference was that this one was dated August instead of June.? Okay, there are a few things that are wacko here. First, if her husband was the cardmember and the letter was addressed to him, then why couldn’t they send it if they thought he was still alive? Second, if the card had continued to be used for over a year after his death, the reward money was due, pure and simple. What difference did the late notice make? Is there some law on this? My sister had let them know as soon as she found that she should, so there was no intention to defraud Citibank. If anything, Citibank was defrauding her. How could they be so incompetent as to not only make these mistakes once, but twice, and after being told of them? Since one card from Citibank had no problem with getting things right about who was the cardmember and sending a rewards check, why didn’t the other? So she called again and spoke with someone who identified himself as being in management. He again apologized for the mistaken addressee and could not believe such an error had been made. He promised to resubmit everything. He assured her there would be no further problems and she would receive her rebate check. It has been six months now and no check, not even a letter addressed to her late husband. In her words, “It had taken so many hours of my time to wait on hold for lengthy periods of time and trying to explain these things to them, I ended up in giving up. I had so many things going on in my life at that time, I could not pursue this any further and handle all of the stress it had caused me.” In my book, that’s robbery, too, taking someone else’s money without their permission. 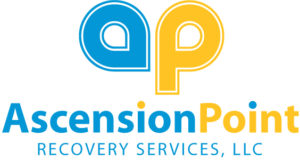 Next in the list of unfair acts, in June of 2019 she received a letter from Ascension Point Recovery for a delinquent bill of $219.29. She knew she paid every bill she had received, so what could that be for? When she called to find out, they said that it was for Mastercard, but refused to give her any more information or send her a copy of the billing because it was in her husband’s name! Evidently, the charge had come through after Citibank cancelled the card and they never sent her the bill. Neither Citibank nor the debt recovery company would send the bill or provide any information on the charges. After all, her husband was dead and they were not going to give her any information. But they wanted their money without any proof it was owed. After checking through all her receipts for purchases, she finally figured what the charges must have been and paid the bill. Ever read The Trial by Franz Kafka? In case you haven’t, a man is tried and convicted of a crime while never being informed what it is. A lot of similarities.

Like many tales, there is a moral to this one. Maybe more than one. They are for married woman. Prepare for unwarranted discrimination. Don’t assume that just because you have a credit card in your name that it is your credit card. No, it belongs to the person whose social security number was given when applying for the card.Once that person dies, so does the account. The same is true for any account that requires just one person’s name on the account, even if it services a house that is owned jointly. I suppose utility companies and even trash pick-up could stop services without a new application in the wife’s name after a husband’s passing, but they seem to have more compassion. Don’t assume a good credit history in your spouse’s name will matter in the least. Even a great credit score for you is of limited value in obtaining a higher limit on a credit card if you don’t have a credit history in your name. Get a card before you need it and use it enough to establish your own credit history. And keep asking to up the limit until it is high enough for regular use. Lastly, don’t expect compassion for your loss or efficiency from companies. Remember, they operate on the Peter Principle: people in hierarchies rise to their highest level of incompetence. Or, to quote Dr. Peter, “Cream rises until it sours.” (click here for an article on the Peter Principle)