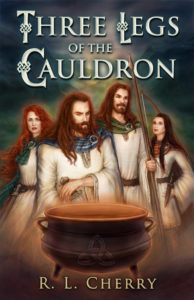 California Mystery writer R.L.Cherry has a new, first historical novel, Three Legs of the Cauldron, set in the late 6th Century Celtic Kingdom of Dal Riata. Dal Riata spanned the North Channel, holding lands on both sides in North East Ireland, as well as Western Scotland and the Isles.

As the title hints, the story is a morality tale about Truth, Honor, and Duty, including several of the famous historical figures of that place and time. It tells of the coming of age of a young warrior as he and his two brothers grow to become men and leaders. In particular, the action follows the youngest brother, Connaire as both his character and a relationship with his next older brother, Cathal grow and strengthen. They and their extended family struggle to find their place in a new land and form new alliances amid a melee of betrayals, battles, and feuds.

This book has vivid descriptions of warrior women, brehons, druids and the Christian Irish monks of Ione. There is excellent detail on the warrior training of Connaire by Scathach, a real historical female character on the Isle of Skye who trained legendary warriors in early Irish and Scottish history.

There are other details which give a sense of place and articles, such as the description of the ‘curragh’ boats used to cross from Ireland to Scotland. While the action moves quickly, in some cases the descriptive writing is sparse, and one sometimes wonders where the children and their mothers are hiding and why Connaire is so easily lead astray. Three Legs of the Cauldron won’t dissapoint most male readers and even some female readers in the romantic encounters.

All together, a good first historical novel and worth the time of reading. Contact the Author, R.L.Cherry, or purchase the book on his website, www.rlcherry.com