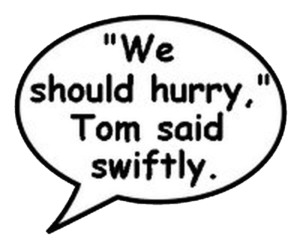 According to Wikipedia, “a Tom Swifty (or Tom Swiftie) is a phrase in which a quoted sentence is linked by a pun to the manner in which it is attributed.”  The classic one is “We must hurry,” said Tom Swiftly.  (Warning: All of the following ones are car-related.  If you are not a car nut, Wikipedia may be needed to understand.)

“I love my Mustang,” said Tom hoarsely.
“It took all day to get my new Goodyears mounted,” said Tom tiredly.
“I polished all my chrome,” said Tom glowingly.
“Do you like my new paint job?” asked Tom colorfully.
“Turn on your high beams,” said Tom brightly.
“I own a  51 Ford Country Squire,” said Tom woodenly.
“My new Buick is fit for a king,” said Tom regally.
“My Dodge can blow the doors off any car here,” said Tom challengingly.
“There s nothing wrong with my Olds Cutlass,” said Tom sharply.
“I would defend my Plymouth to the death,” said Tom valiantly
“If you criticize my Studebaker, it means war,” said Tom hawkishly.
“He thinks he s cool just because he got a Cougar XR7,” said Tom cattily.
“I m shifting into fourth,” said Tom engagingly.
“Be-Cool said they can solve my overheating problem,” said Tom radiantly.
“I always put it in park when I turn off the key,” said Tom automatically.
“Change your damn oil,” said Tom crudely.
“Slicks are great for drag racing,” said Tom smoothly.
“I sure wish I had air conditioning,” said Tim hotly.
“I can put in Vintage Air,” said Tom cooly.
“The heater s working great, but I m not sure about the air,” said Tim warmly.
“The problem was in the switch,” said Tom controllingly.
“It s the middle of winter and now the air won t turn off,” said Tim icily.
“Your new Konis are already shot,” said Tom shockingly.
“My truck is a Dodge Ram,” said Tom sheepishly.
“Hudson Hornets are junk,” said Tom stingingly.
“AMC made some great cars in the late 60’s,” said Tom rebelliously.
“I finally got the car s stereo working again,” said Tom soundly.
“I m shifting into overdrive,” said Tom passingly.
“My brake pads are shot,” said Tom gratingly.
“I just had a blowout,” said Tom flatly.
“I painted by rat rod in flat black,” said Tom dully.
“Should I use my windshield washer?” asked Tom hazily.
“I don t think my defroster s working,” said Tom foggily.
“Want to race my Dodge Demon?” asked Tom devilishly.
“My Taurus will never go down in value,” said Tom bullishly.
“The back seat of my Grand Pre could tell some stories,” said Tom racily.
“I ve been up and down the coast twenty times in my Nomad,” said Tom wanderingly.
“My new instruments are very cool,” said Tom dashingly.
“This car s body is all corroded,” said Tom rusticly.
“What grit sandpaper should I use?” asked Tom abrasively.
“My brake lights work fine,” said Tom readily.
“I use Rain-X,” said Tom clearly.
“Your engine has a loud knock,” said Tom crankily.
“I got speeding  ticket,” said Tom finally.
“Let’s use a pop-up at the car show,” said Tom intently.
“No, it’s not Superbird.  Just a regular Roadrunner,” said Tom knowingly (no-wing-ly).
“Sure, I can overhaul your engine,” said Tom mechanically.
“You hooked up the positive cable wrong on your battery,” said Tom negatively.
“My Barracuda has a hemi,” said Tom superficially (super-fish-ally).
“I think you?re over-revving,” said Tom tactfully.
“Why don’t you like my Ford pick up?” asked Tom truculently.
“My Willys is bigger than yours,” said Tom cockily.