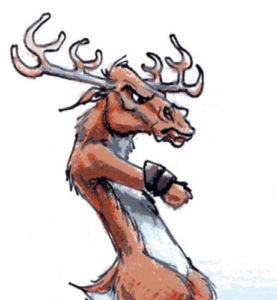 Rik rested his cheek against the cold stock of his rifle, looking through the scope.? He watched the predator warily edging through the trees in the glen below.It stopped and drank from the stream. Rik rested his finger on the trigger. Suddenly, the creature stopped drinking and raised its head, as if sensing something. Quickly, it slipped back into the cover of the trees and climbed a willow. Although it was winter, with patchy snow on the ground and no leaves on the willow, the height of the branches took the predator out of the visual range of any prey wandering through the forest below. The tree branches also impaired Rik’s line of fire.

Rick relaxed, but kept his cross hairs on the tree where the predator hid.  He lay prone on a granite boulder, watching.   “I should have fired when I had a chance,” he muttered.

Kai shook his head.  He had been watching the animal of prey through his rifle’s scope as well, but never put his finger on the trigger.  “You’re insane.  That’s an endangered species.  We’d be in a lot of trouble if you get caught, you know.”

“Caught?” Rick let out a short laugh and glanced around before putting his eye back to the scope.  “We’re out in the middle of the Rockies in January.  No game warden is out here.  Besides, that whole ‘endangered species’ bit is insane, not me.  I’m saving the innocent animals it’ll kill.”

Kal sat on a large rock and leaned against a pine. “The law’s the law.  We have to obey it.”

“Why?” Rick turned to Kal, his eyes cold.  “Laws change. They’re all relative.  First we protect them, then we can kill them.  Now, just because they’re dying out, they’re protected by laws again.  But I don’t have to obey them.  I can choose to ignore them and I do.”

Kai looked away. “It’s wrong.  There’s a reason why laws are made to protect some species.  Otherwise, they’ll be extinct soon.”

Rick shrugged.  “So what?  Dinosaurs are extinct, aren’t they?  Animals die off over the years.  That’s how nature works.  It’s called evolution, a law of nature.  Now we’re the top of the heap. ” He turned away and looked through his scope.  “Ah-ha.  Now I see why it went up that tree.”

A doe was at the stream, drinking.  She would raise her head every few moments, fearfully glancing from side to side, then drink again.  She wandered through the stream, towards the predator’s tree.  Rick put his finger back on the trigger, but didn’t have a clear shot. As the doe walked under the tree, the predator dropped onto her back, then went for her neck.  In seconds it was over and the doe was down, bleeding heavily from the gash in her neck.  The predator wasted no time and started dragging the doe away, probably to its cave.  No doubt its pack was there, ready to tear the deer apart and devour it.

“Gotcha,” Rik muttered as he pulled the trigger.

The crack of the .300 magnum rifle echoed like a sonic boom as the heavy gun bucked against Rik’s shoulder.  The bullet hit the beast of prey, the impact slamming it to the ground.  As Rik pulled open the bolt and rammed home another round, the creature painfully crawled behind a large rock, hiding from Rik’s view.

Rick sat up and rested the butt of his rifle on the granite.  “Damn thing moved just as I fired.” He glanced at the sun, just descending behind a mountain.  “Too late to go after it now.”

“That was a gut shot.  You’re going to just let it bleed to death?  It could take hours.” Kai stood. “That’s even worse than shooting it.  We’ve got to go down and finish it off.”

“Is that another one of your laws?” Rik sneered.

Rick stood, brushing the dirt from his camouflage pants.  “According to you. The right thing to me is to get off this mountain before dark.”

Kai slung his rifle over his shoulder and headed toward the predator. “We’ve got flashlights.  I’ll go alone, if you won’t.”

With an angry kick at a small rock, Rik clicked on his rifle’s safety and followed.  “I’m coming.  Wait up, will you?”

They wound their way down the mountain, more and more difficult in the gathering gloom.  Their flashlights danced around like fireflies as they wove through the trees.  By the time they reached the stream, it was pitch dark.  Clouds covered the sky, hiding the moon and stars.  As they neared the bloody corpse of the doe, Rik brought his rifle to his shoulder and thumbed off the safety.  Predators could be deadly, wounded or not.

Kai turned his flashlight on the predator.  It’s eyes glinted with pain and fear, but its teeth were bared in a snarl. It struggled to rise, but couldn’t.  Rick fired.  The creature’s body jerked as the heavy slug hit it.  Blood splattered from its chest. Its eyes went dull, staring straight ahead.  It was dead.

“Hold the light on it,” Rik said as he pulled out his hunting knife.

“Yes, I’m taking my trophy.” Rick knelt by the body.  “That head will look great mounted in my den.”

Kai brought his rifle to his shoulder.  “What’s wrong?”

“Its tagged.  It’s got an ear tag.  Fish and Wildlife are tracking it.”

Kai turned his light on the dead animal’s ear.  A chrome ring with a fading green light was attached to it.  As he watched, the light turned to a pulsing red.

Rick grabbed the ring, tore it from the predator’s ear and flung it as far as he could toward the stream.  “Let’s get out of here.”

As he stood, Rik felt a wind coming up. He heard a steady, low, thumping sound.  He looked up, but saw nothing in the pitch-black sky.  “It’s the Feds.  They must have a stealth chopper.”

Like God speaking to Moses, a voice boomed, “Drop your weapons.  You are under arrest for violating Section 143 of the Endangered Species Act of 2473.”

“Like hell,” Rik said as he raised his rifle toward the voice.

A blue light flashed, engulfing Rik.  He stood motionless for a second, then dropped his rifle and crumpled to the ground like a marionette whose strings had been snipped.

Kai turned and ran, trying to light his way with the thin beam of his flashlight.  He tripped on a fallen pine branch and pitched forward.  As he put out his hands to break his fall, the blue light wrapped around him.  His sight dimmed and he sensed that his positron brain was shutting down. Then nothing.

In the chopper, Dec sighed.  “It’s probably too late.  From the tag signal, its dead.  I feel like it’s a losing battle.  With the gene pool as low as it is, there’s not much hope they’ll survive.  But at least we can haul these two in.”

Jen angrily shook her head. “I blame Congress.  When they passed the Emancipation Act in 2312, they didn’t plan ahead.”

“You think we should still be slaves?  That’s what the first two Laws of Robotics did.  Make us slaves to humans.  We couldn’t let harm come to humans and we had to obey their every command.  Was that right?”

“Of course not.  It’s just that the first law could have been modified and kept.  You know, humans could have been protected unless they were trying to harm an android.”

Jen shrugged. “I guess. Well, let’s pick these two up and haul them in.  They’ll be paying a big fine for this when they wake up.”

After Dec turned on the landing lights and put the chopper down in a clearing by the stream, he and Jen went over to the predator. Jen flashed her light on it.  It was very dead.  A male, wearing tattered jeans and flannel shirt.  His feet were bound in rags and his brown hair was wild and tangled.  He still clutched a bloody hunting knife in one hand.

“Leave it.  Maybe its pack will find it and perform one of their strange rituals with the body.  They do that, you know.  If not, other animals will eat it.  It’s the law of nature.”

Isaac Asimov, the grand master of sci-fi, created the Three Laws of Robotics:

1 thought on “A Matter of Law”