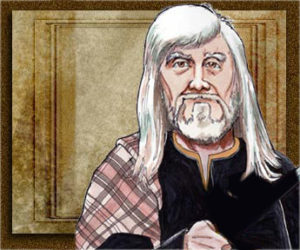 The old man stared out the window, watching the snow drifting down behind the cut-glass panes. At least he thought it was snow. It could be his blurred vision. The reflection of the twinkling Christmas tree lights made it even harder to be sure. He blinked his eyes, wishing he could rub them. Ever since the stroke, he couldn’t even lift a hand.  Mutely, he watched, unable to turn his head to see who was speaking behind him.  He knew it was Fred, but what he was saying was indistinct, undecipherable.  Every so often he would understand a word and tried to make sense of what was being said, but they were disjointed, solitary.  Christmas.  Family.  Will.  They were understandable, but they didn’t make sense.  He sighed.  If only he had listened to the warnings.

Fred paced back and forth behind the old man’s wheelchair, glancing around at the walnut paneling and original Remington paintings.  Why hadn’t the old cheapskate bought Picasso’s or Manet’s  They’d have been far more appropriate for Upstate New York than cowboys.  And worth a hell of a lot more.  “You know that I’m here, faithfully coming to your side when no one else does.  If you recover, remember that I’m the only one of the family who cares.  I’m staying for as long as I can, even though it’s started to snow.”
He glanced down at his Rolex.  He’d been there almost an hour.  Even if he had wanted to stay longer, he would have to leave before the snow stuck on the roads.  His Porsche was not made for this kind of weather.  He looked over at the two male nurses in grey sweats, lounging in arm chairs and watching him as if he were some circus sideshow.  A couple of bums.
“Hey, don’t you think his diaper needs to be changed?” The older one nodded but didn’t move.

Fred shook his head with disgust.  He walked over to the old man’s side. “Well, I’d better go before I get snowed in.  The wife would be upset if I missed Christmas with her.  He hesitated. Maybe she’ll come next time.  I’m sure you’d like her.”

He bent over and started to kiss the old man’s head, but stopped.’ With a scaly scalp visible through the wispy, white hair, he just couldn’t.  Instead, he quickly patted the parchment skin of the old man’s bony hand and pulled his woolen lap robe up a little. “Take care.  I’ll see you later.”

Fred grabbed his Burberry trench coat and scarf from the leather couch. He glared at the nurses. “Why don’t you get off your asses and do something to earn your wages?”
The younger one seemed to feel a little guilt and looked away. The older one just sat there and smiled.

Fred stomped fifty feet across the marble floor to the massive walnut entry-hall door and yanked it open.  He cast a last scowl at the worthless pair of nurses, then slammed the door shut as he left.

The older nurse gave a short, humorless laugh, brushed back his grey hair and stood. “Well, Jimmy, now that the ass-kisser has paid his annual visit, we can have a drink.
He only comes by once a year?” The younger man paused. “And it’s Jim.  I hate Jimmy.”

The older man shrugged. “Whatever. Yeah, Freddy-boy only comes by every Christmas Eve.  It’s just to remind the old man of that Christmas he’d said he was going to cut off the rest of the family out of his will.  It’ll be ten years ago tomorrow.  Only problem was that the old coot had his stroke that night and never got it recorded.  So Freddy comes by to remind the old guy in case he ever recovers.”

He walked around  the long, marble-topped bar that stretched across one side of the room.  With a gilt-framed mirror behind it and the Remington paintings, it looked like a classy version of a Wild West saloon.  Or bordello.  The older man pulled out a couple of Waterford crystal glasses and a bottle of 30-year-old Macallan Scotch whisky.  He poured a generous amount into each glass, added ice, soda and lemon twists, and handed one to Jim.

“Yeah.” Bob walked back to the arm chair and plopped down.  “Nothing but the best for the old man.  He had cases and cases of good stuff.  His lawyer carted off all the wine and Freddy grabbed the port and cognac, but I prefer the hard stuff anyway. Gets me a good buzz quicker.”
Jim walked back to his chair, but didn’t sit.  He studied Bob.  Years of booze were taking their toll, leaving the older man with red-veined cheeks, sagging jowls and a paunch.  His sweatshirt had food stains. “Uh, ya think we should change the old man?  His diaper’s probably dirty.”

Bob shook his head.  “Jimmy, I’m paid to keep him alive, not comfortable.”

“Why? I mean, you worked for the guy for what, about twenty years before his stroke.  Why do you even stay if you hate him?”

Bob downed half his drink in one gulp. “I worked for him for twenty-four years before his stroke.” He studied his glass, the lights of the Christmas tree the lawyer had made him put up glistening in the prisms of the crystal.  “I stay for two reasons.  First, it’s for the money. The lawyer likes having me around ’cause I keep the old guy alive. As long as he lives, the lawyer makes more and more money.  So he pays me good.  He’s paying me four times what the old skinflint did, plus a big bonus each Christmas he’s still alive. The other reason is to watch him suffer.”

Jim dropped into his chair. “Whoa, man, that’s cold.  You like to see him suffer?  Why?”

“Because he ruined my life.” Bob finished his drink.  Then he pulled himself out of his chair, went to the bar and mixed another.  He turned to Jim and leaned on the bar.  “I stayed here twelve hours a day, six days a week back then.  Ten years ago, I was supposed to have Christmas off, but the old fart changed his mind and said I had to stay.”

Bob laughed.  “Said he’d been attacked by three weirdos who broke into his room in the middle of the night, that they’d threatened him if he didn’t give up his money.  Claimed I’d have to have given them the alarm code or let them in.  After I made sure the alarm hadn’t been tripped or turned off, I told him it must have been a bad dream.  He swore it hadn’t been.  He said he wanted me to stay around until he checked everybody out.  The cook, the butler, all those other guys, too.” Bob took another gulp of his drink. “Then I got a call from my wife.  My youngest kid was always sorta sickly and he wasn’t doing too good.  I begged the old jerk to let me off, go home to my kid, but he said I’d lose my job if I left. So I stayed.  Funny thing is that after his stroke, it didn’t matter about anybody getting into the old man’s bedroom that night.”

“That ruined your life?”

Bob nodded. “We only had one car and I had it.  Kid got worse, so my wife finally called an ambulance. ? It was real icy and it got in an accident. Big mix-up for hours. By the time another ambulance got to my house and took my kid to the hospital he was real bad off.  Took him to County Hospital ’cause I didn’t have no insurance or enough money for a decent one.  It’s a real second-rate place.  Plus it was Christmas, so they couldn’t find a specialist.  My kid died.  The old man might as well have killed him himself.”

Bob shook his head. “My wife blamed me.  Took the rest of the kids and bailed before I finally got home.  Never found out where she went. The old man’s lawyer said he needed me more since the old guy’s stroke and I didn’t have no place to go.  Told him I’d stay 24/7 and keep the old coot alive for enough money.  It was the old man’s money, so I got it.  Everyone else’s been let go over the years, so it’s been just me with the old man.  Now I get to see the old man suffer like I suffer and still make some big bucks.”

Jim shook his head.  “Guess it’s lucky for you the old guy had a stroke, huh?”

Bob was taking a drink of his Scotch when Jim said that and he started laughing so hard he choked.  Jim sprang from his chair and began to pound Bob’s back.? Finally, Bob regained control and waved Jim away.

After taking a deep breath, Bob continued.  “That Christmas, the old man had all his family here.  I don?t know what set him off, but he started screaming and telling them all to get the hell out, that he was cutting them out of his will. Said all of them were worthless, except for Fred.”? He chuckled.  “Funny thing is that he always called his nephew a no-account spendthrift, but suddenly he was the golden boy.  So they all ran out, except for Fred.  Then the old man told him to get out too, so he did.”

“That’s when he had his stroke?”

Bob studied the younger nurse, then took a swig.  “No, not right then.  Not until after my wife called to tell me my kid was dead and it was all my fault.  The old man was on twenty-six different medications, so I played around with them before I gave them to him.  Then he had his stroke.”

Jim stepped back. “Wait, you’re saying you caused it?”

“Probably.” He draped his arm across Jim’s shoulder. “But you won’t say nothing, will you, Jimmy?  I had you hired to help me, so I know your background.  You spent time in the pen for extortion.  You stole from patients and maybe even killed one,  though they couldn’t prove it.  You’ve got the gravy train here.  I’ll make sure you make a bunch of money, with bonuses, as long as the old man lives.  I’m betting you’re not dumb enough to kill the golden goose.”

Jim stood, silent for a moment, then extended his hand. “You can call me Jimmy.  Here’s to keeping the golden goose alive.”

Bob topped off his drink, then staggered toward the old man.  As he did, he bumped over the fake Christmas tree, leaving it on the floor with the fallen angel tree-topper mortally shattered.  He grabbed a handle of the old man’s wheelchair and jerked him around, staring into his terrified eyes.

Bob Crotchet raised his glass. “Here’s to you, Ebenezer Scrooge.  Merry Christmas. ? My dear Tiny Tim is in heaven now because of you.  But I?m going to make sure your life on earth is hell for as long as I can.”

Mr. Scrooge closed his eyes.  Why hadn’t he listened to those three weirdos, those Christmas ghosts?  But it was too late now.  A tear trickled down his cheek.