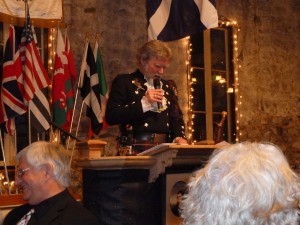 There is an old adage that behind every successful man there is a woman . . . telling him what he did wrong. Now I’m not saying that is true, but no man can doubt that the lassies do have a strong influence on the lives of those of the male gender.

For a start, look how many Robert Burns poems would be missing if not for the inspiration of the lassies. And probably one or two of them told him, ‘Rabbie, your meter’s a wee bit off,’ or ‘Rabbie, my luv, I like red, red roses, but is ‘June’ and ‘tune’ the best rhymin’ ye can do?’ That’s not really criticism. It’s just that the lassies want to improve the men around them and what they do.

That’s why there are ‘honey-do’ lists. It keeps men from wondering what they will do with all their free time. But consider this, my male companions, if we were not busy mowing the lawn or painting a wall, might we not have found a cure for cancer or invented an engine that runs on tap water? To be fair to the lassies, we might also be watching a game, tinkering with the car or surfing . . .on the Net, I mean. But we will never know what we would have accomplished if left to our own devices, will we?

However the lassies do often save us from disaster. They obviously read the speedometer much better from the passenger’s seat than we do from the driver’s and do keep us updated on how fast we are moving doing the highway. And how many times have they prevented an accident by firmly applying the passenger-side brake pedal. The lassies even help keep men from falling asleep while driving. Their non-stop monologues make it impossible to doze off. Yes, the highways are far safer because of the lassies.

Then there is that matter of our attire. Except for some of us who dress like peacocks for events like this, the male sex as a whole is not known for its fine fashion sense. So once again the lassies come to the rescue. ‘Your not going to wear that, are you?’ has saved many a man from making some wardrobe faux pas, has it not? It is beyond us why a clean T-shirt and Levis are not appropriate for a fancy restaurant. And does a little grease spot really matter that much? But a raised eyebrow and word or two of not-so-gentle advice will quickly bring us to our senses. After all, the lassies have the key to what is proper attire: if it’s comfortable, you shouldn’t wear it.

Now lest you think this is too critical of the lassies, if not for them men might still be dragging their knuckles as they plodded through the jungle on the way to their caves, eating raw meat while scratching unmentionable places and belching. Well, some of that hasn’t changed much, but not for lack of effort by the lassies. It is the lassies who inspire us, civilize us and give us a reason to be something other than rude, crude slobs. So let us be upstanding for a toast to the lassies, God bless them, and we thank them for putting up with us.