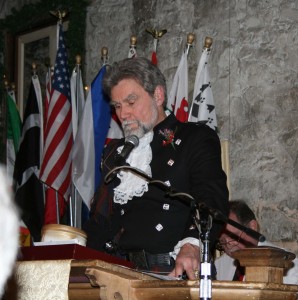 Tonight we are here for the 210th remembrance of the poet Robert Burns. Such a celebration has been done since 1801. It started on July 21st of that year as a little gathering of his friends on the fifth anniversary of his death. They met in the Alloway cottage where Burns had been born on January 25th, 1759 and the next year moved the date to the anniversary of his birth. I must admit celebrating a birth makes much more sense than celebrating a death. Unless we’re talking about your worst enemy. So now Scots, those of Scots descent, those interested in things Scottish and those who just like to see guys in skirts, listen to music on an instrument that can sound like a tortured cat, hear poetry in a language that can seem harder to understand than Greek, eat a dish of the innards of sheep that they pretend to like and drink good whisky get together each year about this time to honor Robert Burns. But why do it? I mean except for drinking the whisky, which is for obvious reasons.

Well, we often hear it is because Burns was a great poet. Right. Great poets always get days in their honor that are observed worldwide. Like Shelley Sunday, Marlowe Monday, Tennyson Tuesday, Walt Whitman Wednesday, Thoreau Thursday, Frost Friday or, of course, Shakespeare Saturday. Yeah, sure they do. Now I admit that I am not a poetry expert. Although I do enjoy reading poetry, I do not have any expertise in this literary form. But even I know that Burns is up against some pretty stiff competition when it comes to rhyme, meter, and such. Yet Burns has his day and none of these other world-renown greats have theirs. You have to wonder why. I know that Scots are a fearsome bunch and some may claim it’s because the world wanted to placate the oatmeal savages in fear of losing their sheep, their gold, or even their lives. Hmm. I guess there is something to that argument. But that?s not really it. It’s because Rabbie Burns speaks to us all where it hits the hardest: to the heart. And not to just the Scottish heart. To the hearts of people all over the world, even though he wrote in Scots Tongue.

Burns was quite capable of writing in ‘proper’ King’s English and could have written his works in that, but chose to write in the language of the common Scot.

This mix of Anglo-Saxon, Norse, Scots Gaelic and Norman French may be difficult for modern Americans to fully understand, but with a little effort these words can speak to our hearts as they did to the Scots who were Burns’ original audience.

Let’s consider a few examples. One very emotional time is when we close the old year and look to what the new one may bring. Do we sing this as the clock strikes twelve?

It’s by Alfred Lord Tennyson. You know, the Tuesday guy, Charge of the Light Brigade and all that. It’s . . . a cute little poem, but how does it compare to the first two stanza of the familiar Auld Lang Syne by Rabbie?

Verse Two
And there’s a hand my trusty fiere,
And gie’s a hand o thine
And we’ll tak a right guid-willie waught,
For auld lang sine

Now I may be prejudiced, but even in the translation this has more pathos than Tennyson’s New Year’s poem. And in the original Scots tongue, it brings a tear to your eye.

The next comparison illustrates very well the differences between Burns and many other great poets, especially those of his age: a comparison of Keats’ world-famous Ode to a Grecian Urn and Rabbie’s less-famous Address to a Haggis. In one we have a Romantic poet writing of an imagined tale depicted on a vase that you might see in a museum. If you are lucky. The language is flowery and the images idealized and cleansed. While Burns, the poet of the common man, wrote of a dinner of the heart, lungs and liver of a sheep mixed with oatmeal and stuffed in the sheep’s stomach eaten by poor Scottish crofters who could not afford to eat the mutton of their own sheep. His language was earthy and images real and gritty.

With Keats you get:

Ah, happy, happy boughs! that cannot shed
Your leaves, nor ever bid the Spring adieu;
And, happy melodist, unweari’d,
For ever piping songs for ever new;
More happy love! more happy, happy love!

While with Burns you get:

His knife see rustic Labour dight,
An’ cut you up wi’ ready sleight,
Trenching your gushing entrails bright,
Like ony ditch;
And then, O what a glorious sight,
Warm-reekin’, rich!

Or, for all you Sassenachs,

His knife see the serving-man clean,
And then cut you up with great skill,
Making a trench in your bright, gushing guts
To form a ditch,
And then, 0h! What a glorious sight!
Warm, steaming, and rich!

I could go on, comparing Burns’ poems of the people like A Man’s a Man for A’ That, To a Louse, and To a Mouse, on Turning Her Nest With a Plough (which is tonight?s theme) with other famous poems, but you get the point and I am sure you want to get on with the evening. So I will merely mention that Burns’ romantic poems like A Red, Red Rose and Ae Fond Kiss, and Then We Sever compare favorably with Shakespeare?s romantic sonnets. In my book, ‘O my Luve’s like a red, red rose, That’s newly sprung in June’ and ‘Ae fond kiss, and then we sever; Ae fareweel, alas, for ever!’ stack up well against ‘Shall I compare thee to a summer’s day?’

In a different vein, when set to music, the Burns poem titled Robert Bruce’s March To Bannockburn, better known as Scots Wha Hae, is cry for liberty that became the theme song of the Scottish National Party. It?s call for standing firm for freedom has made it a de facto national anthem of Scotland.

‘By Oppression’s woes and pains!
By your sons in servile chains!
We will drain our dearest veins,
But they shall be free!

‘Lay the proud usurpers low!
Tyrants fall in every foe!
Liberty’s in every blow! –
Let us do or dee!’

His love of liberty was not confined to Scotland, however. For we Americans he wrote Ode For General Washington’s Birthday and Ballad On The American War, which I am sure made him very popular with King George and the British government. It was not a time when it was safe to have such republican sentiments, much less express them so publically. But Burns did just that.

If you read through his 559 ballads and poems, you will find at least one and probably many that speak to you. Yes, Rabbie Burns wrote poems to touch our hearts and bring tears to our eyes. He wrote poems that reach far inside us, to the very core of our being. And that is why we honor him tonight. So be upstanding and join me in a toast to Scotland?s favorite poet, to our poet, Robert Burns.