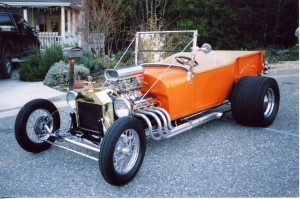 A 9″ Ford rear end drives the 17″ Mickey Thompson rear wheels. In front are motorcycle wheels. The color is Sunset Pearl. It is not, S insists, Caltrans Orange.

Many of the Roamin Angels are ‘gearheads’ i.e., the type of guys who can rebuild an engine better than new and enjoy doing it, but not all are.  Some are what Steve DeSena terms ‘wax on, wax off’ people, those whose automotive talents are basically limited to keeping their car shined.  And he calls himself one of those guys.  It has nothing to do with lack of love for cars, but mechanical ability. 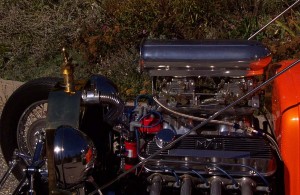 The engine is a Rex Hutchinson Ford 289 CID. Hutchinson is world famous for his racing engines and this is one of them. Even after de-camming and putting on smaller 400 cfm Edlebrock carburetors so that it will idle, it will still pop the front wheels off the ground.

Steve fell in love with T-Buckets (topless hot-rodded Model T roadsters) when he was sixteen and rode in one owned by Norm Grabowski in 1956.  Norm is known as ‘The Father of the T-Bucket’ and built the Kookie Kar that was used in the TV series ’77 Sunset Strip,’ so it was quite an experience.  But wanting something and having the time and money to get it are two different things.  In 2003, Steve had enough of both and took the plunge, buying a ‘basket case’ that had a rolling chassis, body, engine and not much else.’ He was the third person to own it in that condition, but Steve wanted it on the road. After stretching the frame for the shortened pickup bed, the suspension engine, auto trans, paint and basically everything else had to be redone.  But not by Steve himself.  A fellow Roamin Angel did all the work.  However Steve does love how it came out. He keeps it fairly local, but did take it to Hot August Nights once. The washboard I-80 almost shook the car apart.  T-Buckets are not known for their smooth ride.  Still, Steve is happy to finally have his own T-Bucket.  And he always keeps his can of wax ready.