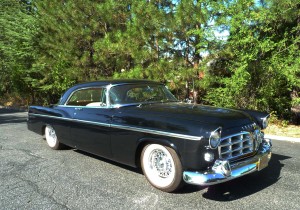 1956 was the second year for the 300 series Chrysler, with the first one named the C-300 because of its 300 HP engine and not to be confused with the 1957 Chrysler 300C. This color is Raven Black, with Regimental Red and Cloud White the only other colors offered in 1956, with interiors only in tan leather. Only 1,102 were sold.

For a car to be timeless, it must have a special quality that makes so. It may be its historicity, its body lines, its drive train, the way it feels to drive it or some combination of the four. For Bob Sauder, it’s all of the above for his ’56 Chrysler 300B. The Chrysler 300-series cars are legends of the mid-Fifties to early-Sixties. Combining luxury and awesome performance, they had the best of both worlds and far outshone their Cadillac and Lincoln competition in the performance end. The 300’s dominated NASCAR in their first years of production, 1955 and 1956. The body of the ’56 Chrysler had clean lines without the tall tail fins and huge grills that came out the next year and marked American iron in the late Fifties. It has a simple elegance. The drive train is notable in itself. Chrysler’s Hemi engine is the stuff dreams are made of. Automotive dreams, that is. The flow-through hemispherical combustion gave more efficiency to the burn and, therefore, more power. The 1956 dual-carbureted version of the 354 CID engine put out 355 HP, the first production American car to top one horsepower per cubic inch, and a Hemi-equipped Chrysler was officially clocked at 139.40 MPH that year. And the ride and comfort with that speed? “It’s like sitting on your couch,” said Bob.

Like most car guys, Bob has been a long term lover of cars. “It started with a ’31 Pierce Arrow seven-passenger sedan,” he said, referring to a car that had been in rough condition when he bought it. “I got it running, then sold it a few months later.” He has bought and sold many cars over the years, including high performance models like a ’70 Plymouth Hemi GTX. But his ’56 Chrysler 300B is different than all the others. It became a keeper.

Bob bought the Chrysler 300B in 1960. It had been the personal car for the owner of a now-gone Chrysler dealership in Walnut Creek. It had the Hemi with dual Carter four-barrel carbs, Powerflite push-button auto trans, power steering and brakes, A/C and a 6-way power front seat. It also had two very rare factory options, Wheel Rim wire wheels and a Highway HiFi record player. 1956 was the first of the three-year run for the option. It used special 2 1/4″, narrow-grooved, 16 2/3 RPM records that were custom produced for the unit and played through the car’s radio. Amazingly, the little records had 45 minutes of music per side. Limited title selection and break-down problems with the units led to an early demise.

For about six years, the Chrysler was Bob’s and wife Shelly’s daily driver. The only change he made was swapping out the two-speed Powerflite for a three-speed Torqueflite. Both he and his wife enjoyed the comfort and the power. Especially the power. Back then, Bob admits he had a bit of a lead foot, especially in his Mopars. “I had it up to 142 MPH sometime in the Sixties,” he said. “Once I got pulled over for road racing an Imperial in ’56 Chrysler St. Regis I had. We were doing 125.” Shelly, though, was not one to find fault since she used to love drag racing their Plymouth GTX that had a 440 CID mill with a Six-Pack (three two-barrel carbs). Being a little older and wiser, they are a much calmer in their driving now.

When it came time for a new car, Bob decided to do something he had never done before: he stored it instead of selling it. It sat in his garage until they moved up to the Sierra Nevada Foothills in 1984. “It was in pretty good shape, just tired,” Bob said. He went local for most of the work. Craig Wallace did the paint and Riebe’s the engine rebuild. He bought a kit and redid the interior. Bob also replaced the cast-iron cased Torqueflite with a rebuilt, lighter-weight, aluminum-cased one. “It gave it a better range of torque,” he said. It really brought the car alive. Bob chose Roamin Angel Bob Madsen to go through the A/C, which is an interesting twist to the story. Bob Madsen owned an air conditioning repair shop in Concord years ago and used to work on the Chrysler when needed before Bob Sauder put it in storage. Small world. One thing that has not needed replacing on the Chrysler after almost 60 years is the padded dash.

After 5 years of work, the restoration was complete. “It helped a lot that I let it sit a few years,” he said. “When I got older I came to appreciate it more.” Now he and Shelly take it to car shows in NorCal, where it is often a trophy winner. And he has no plans to get rid of it. “It’s the only car I ever had that I didn’t get tired of,” he mused. “It’s timeless.”