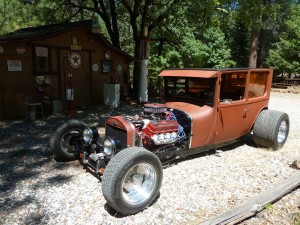 Ever hear the song ‘Bad to the Bone’? That’s T-Bone. Its ’25 Buick headlights cast a big shadow.

When you talk to Lynn about the ’27 Model T two-door sedan hot rod he just finished, he often mentions ‘designed and built by owner.’ And for good reason.  T-Bone (the name Lynn gave his Model T hot rod) was conceived of and almost entirely built by Lynn himself.  He is a dedicated hot rodder.  Since he retired, Lynn has spent five hours or more almost every day working on whatever has been his current hot rod project.  He says, “Sometimes I want to come in (the shop) after dinner and work until midnight. And when  Lou (his wife) is gone, I get to do what I want.” For the last four years, it has been working on T-Bone.

When it first appeared in the Roamin Angel Corner as a work-in-progress over two and half years ago, he had already custom-built the frame from 2″ X 4″ rectangular steel tubing, ‘z’ed’ (dropped down just in front of the rear wheel) to lower the body.  It had the 9″ Ford rear end, locked so that both rear wheels constantly turned at the same speed.  The ‘suicide’ front suspension and coil-over-shocks rear suspension with four-wheel disc brakes were in place.  Even the Chevy 454 CID engine that was bored to 468 CID and Turbo400 trans were nestled in the frame behind a four-core radiator in a custom-built shell.  Sitting on Boyd Coddington wheels, T-Bone looked near completion to the casual observer.  Such was not the case.  The body itself had a patina of rust dents that were hard to pound out of its thick sheet metal.  There was no interior of any kind, including seats and floorboards, and no top.  Little matters like wiring and glass needed to be done.  Although the engine was complete, Lynn had never had a chance to fire it up.  Even with Lynn’s faithful work schedule, T-Bone was some time off from being on the street.

After many hours of massaging out the dents and sanding off the rust (which, fortunately, was never very deep), Lynn painted the body in ruddy brown primer.  He says that primer is not for the long term, but he’s not sure what he will do for the final paint job.  For now, however, it is protected from the elements.  Reminders of the body’s heritage of sitting out in a field for years were three bullet holes.  Lynn left those since they add to T-Bone’s rugged, tough-guy look.

When it came to the engine and wiring, Lynn did get help from friend S.  The Swap Shop-purchased engine had a couple sticky valves, so they put in a Sig Erson cam with a gear drive and roller rockers.  After changing to Edlebrock intake and carb with an ATI ignition, T-Bone purrs.  Well, make that roars.  Still, although T-Bone has the biggest engine of Lynn’s three rods, he made it the most streetable.  “If I didn’t,” he says, “my wife wouldn’t ride in it.” S handled the wiring since Lynn was more than willing to admit this was not his area of expertise.

Then came the interior.  Lynn fashioned floorboards and custom made aluminum side and rocker panels in the interior.  The seats he scavenged from a van and rebuilt.  Then he crafted a dash with VDO gauges and covered it with leather.  To keep out the sun and rain, he made new top bows and shaped a plywood roof, which he had covered with vinyl.  He did add an AM/FM/CD for sounds, but doesn’t use it when driving.  He says, “I don’t know if you’d hear it with the engine running.” Then he installed windows, crafting plexiglass ones for the rear of the sedan.

Now T-Bone is finally on the road.  Since it has taken Lynn about four to five years for each of the last street rods he has built, Lynn says that he thinks this will be his last.  He still has things he wants to do on T-Bone, like add carpets to reduce cabin heat and noise and do a final paint job.  Still, he said his cousin has another old Ford body sitting out in a field that he can get for free.  So stay tuned for the next owner-built hot rod.