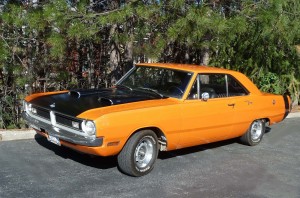 For a Muscle car, performance was premier, but looks mattered. With Hemi Orange paint, Rallye wheels, a flat-black hood and a bumblebee stripe, this Swinger really swings.

Back in November of 1968, Jim Marchio had his first love affair with a Swinger. It was a ’69 Dodge Dart Swinger that he ordered from the factory. “Most of what I wanted was in the Swinger package,” he reminisced. “The only thing I added was a 3.90:1 Sure Grip rearend.” The Dart was the smallest and lightest Dodge. The Swinger 340 package included a 340 CID engine with a 4-speed hooked to a Hurst shifter, heavy-duty suspension and a limited-slip differential. It also had those all-important performance hood and bumblebee stripes around the tail for that cool look. The ads promised “6,000 RPM for under three grand.” It was minimalistic Muscle.

Jim took his Swinger to the strip where it turned times in the 13 second range. Although rated at 275 HP, Jim felt that was under-rating for insurance purposes, a common practice back then. “I would eat up the Road Runners and the 396’s (SS396 Chevies),” he said. “Except for the 375 HP ones, I wasn’t afraid of anything.” He did learn a lesson in bigger can be better when he raced a Road Runner on the street one night. “We were dead even in first, then in second, which was unusual, since I usually had them by then. Then we hit third and he left me. When we met up later, he popped the hood and showed me a 440 6-Pack (440 CID engine with three two-barrel carbs that was rated at 390 HP).”

When Jim was drafted, he drove it back to Ft. Benning, GA. But when he was sent to ‘Nam, he left the Swinger at home. His 16 year-old brother rolled it on a freeway on-ramp. Although his brother was unhurt, “It was not a happy letter,” Jim recalled. “It was too much car for him.

Although the Swinger was repaired, Jim’s life changed. Jim married Beth, got out of the Service and went to college. “I couldn’t afford a car that got 11 mpg and my wife had to use both feet to push in the clutch. The Swinger was replaced by a Datsun 1200 that got 35 mpg. And Muscle cars were forgotten. Almost.

In 1997, Jim’s daughter totaled his S-10 pickup. When he got the insurance settlement, he decided he wanted ‘something fun.’ “I started thinking about the car I had back in the day,” he said. Checking in the Auto Trader, he found only two Swingers listed. There was a ’69 in Ohio. The other was a ’70 in nearby Auburn. It was a no-brainer. Especially when he checked the Swinger out. It was all original, even down to the paint, although a bit oxidized. The upholstery had been redone, but just like it had been off the assembly line. It had the Rallye dash, which included full gauges included a tach. The only real difference between his first-love Swinger and this one was it had a 3.55:1 rearend. With only 88,000 original miles, it was an incredible find. Jim bought it.

Since the purchase, Jim has not needed to do much on the Dart. The paint, although not perfect since no factory paint was, now looks great. “I clean it and I polish it,” he said. “Then I polish it and I clean it.” He has replaced hoses and some of the wiring to make his Swinger look correct under the hood. He has also done maintenance, including replacing the carb, but no major work. Although it’s not a ‘Concours-quality restoration,’ Jim is happy with his Swinger. “Even if I could afford to do a full restoration, I wouldn?t,” he said. “It can only be original once, like being a virgin.

One unique claim-to-fame for this Swinger is that it was the model for an ERTL Highway 61 model. ERTL makes die-cast car models and Jim’s Swinger was used for the 1/18th scale ’70 Dodge Dart Swinger they made some years ago. The graphic designer came to his home and spent a day measuring the car and photographing it for their model. “I got two models out of the deal,” he said laconically. “It’s okay. I was glad to do it.”
While Beth has no interest in cars and does not drive this Dart, Jim said she ‘tolerates’ his second love affair with a Swinger. Although Jim used to take his Swinger to car shows, where it has won trophies, he doesn’t do it much anymore. “I’m worn out on the whole cleaning thing,” he said. “It took a whole week to prep for a show.” But you might see him occasionally at Cars and Coffee in the K-Mart parking lot on Saturdays from 8 until 10 in the morning. It’s a place where car guys like Jim hang out.