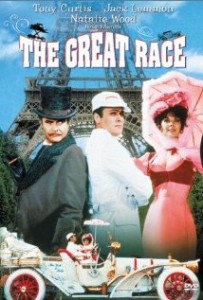 To some people, ‘The Great Race’ brings to mind the 1965 rather slapstick movie starring Tony Curtis, Jack Lemmon and Natalie Wood about a race from New York to Paris in the early 1900’s. Others might think of the 1908 New York to Paris Race that the movie was very loosely based upon, including the movie’s winning Leslie Special resembling the 1907 Thomas Flyer that won the real race. But to people like Bill and Carolyn Coker, it means the annual race that might go across the U.S., or into Canada or down to Mexico.

Started in 1983, The Great Race varies its starting and finish lines each year. The first one went from Knott’s Berry Farm in Buena Park, CA, to the Indy 500 Speedway in Indianapolis, IN, but later ones have also included TX, FL, WA, PA, VT, GA, NY, SC, ME and even one that ran from Ottawa, Canada, to Mexico City, Mexico! Technically, it is not a race, with cars speeding along highways and through cities in an attempt to be first. Bill described it as ‘a timed endurance, navigation rally, driven at 5 MPH or more under the speed limit on a very accurately measured course.’ There is a printed guide, well, more of a book, that gives exact instructions on how fast to go for how long, even how long to pause at a stop sign. One part of one example instruction in the ‘rookie guidelines’ reads, “30 miles per hour for 36 seconds, then change average speed to 45 miles per hour for 1 minute 12 seconds,” and there would be hundreds more like that in the real book. That’s not that hard in this age of computers and cars that almost drive themselves, right? Wrong, at least in The Great Race.

The Race is only open to cars 1972 and older that have stock running gear. At least racers are allowed to add an analog speedometer and clock to account for the terribly inaccurate ones in cars that old. You can also have a stopwatch, but no GPS or even paper maps. The only occupants of each car are a driver and a navigator, who focuses on reading the instruction book and giving directions. To find more about the instruction book and the strict rules of the race, click here. While cell phones are allowed in the car, they are only to be used for emergency calls, not timing or apps. Using your phone any other time is ‘unsportsmanlike conduct.’ Here, here, there may be over $150,000 in prize money, but this is a race of ladies and gentlemen, you know.

Bill and Carolyn ran their first race in a ’60 Rambler American.  It was a great car for doing this. “It did super,” Bill said, “but not old enough.” Like golf, the Race has a handicap, with the older the better. Although cars as old as a 1907 Renault have completed the race and it was even won by a 1911 Velie in 2011, cars that old are much more prone to breakdowns than newer ones.  The mid 1930’s are the sweet spot in having enough power to complete and a good handicap without falling down.  Fords of that era are common in the Race, but Bill wanted something different and more comfortable. So he chose a ’36 Packard 120B coupe.

In keeping with the rules, Bill’s Packard is stock, with a 288 CID straight-8 engine and 3-speed manual trans. However, the rules allow modifications that are for safety and lessen unnecessary breakdowns, so Bill changed the electrical to 12 volts with an alternator and put in an electric fan, dual electric fuel pumps, hydraulic shocks, a front anti-sway bar and, most importantly, radial tires. Also allowed is adding air conditioning, which is nice for crossing the country in June. Bill did that for this year. The only other big additions are the rally clock and a calibratable and very accurate Timewise speedometer.

In the four races since Bill and Carolyn entered their Packard, they have done quite well. If you make the exactly correct time to the second when going through any of the four to eight checkpoints on each of the nine days of the race, you get an ‘ace,’ a sticker to put on your car to prove it. They have 18 ‘aces’ on the side of their car for the four races it’s been in, and once finished 3rd in their division. According to Bill, “It’s a lot like golf. Hit the ball and count the strokes. In this, drive the course and count the time. Like golf, it’s simple, but takes a lot of time and practice to do it well.”

The most heartbreaking moment was when they were leading their division by 13 seconds on the next to the last day and a $10 accelerator pedal rod broke, costing them the $10,000 prize. “That’s what racing is all about,” Bill said philosophically.

Bill emphasized that this is a team sport, with the navigator every bit as important as the driver. The navigator times every segment, notifying the driver when there is a change coming up and whether time needs to be made up or lost due to what has happened. A wise driver listens to his or her navigator. “In our first race,” Bill said, “my wife was watching and trying to give me guidelines two times. I corrected her when she was right. That was the last time I overruled her judgement.”

Although this might seem a romantic nine-day trip together, the Race is about the Race.  The only thing we talk about in the timed section is that. The moment you talk about something else like an old car in a field, you’ll miss a change.  That being the case, Bill and Carolyn are happy to be spending their 50th anniversary on this year’s Race.
There will be a record 120 cars competing this year, including eight from Japan with their own support and video crews. They will race from St. Louis, MO, to Santa Monica, about 2400 miles from June 20th to the 29th. Follow the Packard?s progress by clicking here.