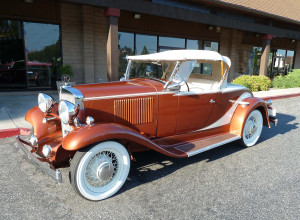 This 180 inch long roadster is impressive, with its two-tone paint and white-wall tires. At $795, it was a quite a bargain in 1932, but the Depression had killed car sales. Hupmobile closed in 1940.

When J inherited his ’32 Hupmobile Model B roadster, he inherited much more than just a car. W, his father, had loved cars and had a small collection of some very rare ones.  The ’32 Hupmobile (often just called a Hupp, after the man who founded the company in 1909)  is one of six known roadsters of that year still in existence, spread as far afield as England and Australia. His father bought it in 1987 from the man who had lovingly restored it to better-than-new condition, but had grown too old to drive it.  The proof of the restorer’s craftsmanship is that W picked up the car in Upland in Southern California and drove it up to the Bay area on the freeway at 70 MPH without a hitch. In fact, it performed so well that he took a detour on the way home through Oregon. 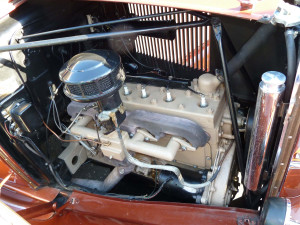 The Hupp?s 228.1 CID L-head engine purrs like a contented cat.

But then W was a man who wanted cars to drive rather than put on show.  A friend of Bill Harrah of casino and car-collecting fame, he used to meet Harrah at his Nevada ranch for a little friendly auto racing with their classic cars.  W always won because, although he spent a fortune restoring them, Bill Harrah built his cars for a museum rather than running on the road.  W felt so strongly that cars were for ‘touring’ rather than just exhibiting at car shows that he established the perpetual W W Trophy, open only to those use who drive their cars, at the Hillsborough Concours d’Elegance.  Since W passed away in 1991, J is determined to keep the ’32 Hupp on the road.  It has an in-line six that produces 75 HP.  By comparison, 1932 was the year that Henry Ford brought out his Model B with a ‘hot’ V-8 that produced 65 HP.  J’s Hupmobile has a three-speed trans with syncos for second and third gears.  Brakes are ‘SteelDraulic’ four wheel mechanical ones.  Oddly enough, Hupps earlier had hydraulic brakes, but abandoned them for several years in favor of mechanicals. However the Hupp does stop surprisingly well.  J says it is a “sweetheart to drive” as it floats down the road on its softly sprung suspension. 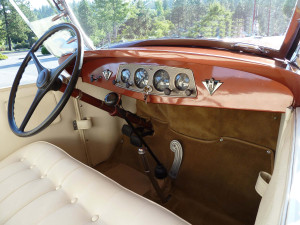 The exterior paint colors are mirrored in the interior. The Hupmobile logo flanks the instrument panel. Note the unusually-shaped gas pedal, unique to Hupmobile.

Although he has not taken it on any trips to Oregon, J does regularly drive it to shows in the Bay area and around town.  He calls it his ‘picnic car’ because he enjoys taking it to the park with a picnic lunch.  J not only inherited a very beautiful ’32 Hupmobile, but also the love of driving it.