Ransom E. Olds started manufacturing cars in 1897, making it the oldest marque in America and one of the three oldest in the world when GM closed the plant down in 2004.

To say that Roamin Angel J’?s 1914 Oldsmobile Model 54 seven-passenger touring car is ‘rare’ is like saying the 2011 Corvette ZR-1 is ‘peppy’: a gross understatement.  As far as he knows, it is the only one left in existence. This beauty of an automobile originally sold for $3700, about what a house cost back then. And it is almost as big as one. With a 139″ wheelbase, sitting on 36″ wheels and a curb weight of almost 5000 lbs., it is an imposing vehicle.  In fact, the frame is the same as Olds used for its fire trucks.  When J’s dad bought it back in 1968, it was still big, but not as impressive.  The engine and trans were in parts and the whole car was in rough condition.  But he saw the potential and he and J rented space in a body shop while they did a three-year, body-off restoration.  It involved rebuilding the monstrous 560 CID, 43.8 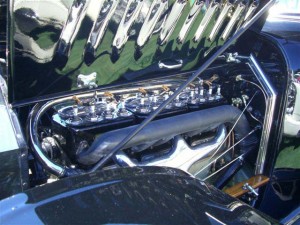 This cast-in-pairs engine has ahead-of-its-time, with an electric starter and a 12 volt electrical system. J?s dad opted to omit a muffler for this high-performance car of its time.

HP aluminum-block engine, as well as the three-speed trans from boxes of parts. Unique items like the German silver radiator and optional nickle-plated headlights with French beveled glass had to be redone.? In the interior, horsehair carpets and seats with leather imported from England had to be replaced with original materials and the cherrywood dash and Circassian walnut octagonal steering wheel had to be repaired and refinished.  Plus all the normal body and paint work.  It was well worth the effort.  It has won awards for best of show and best of class at such prestigious events as the Pebble Beach, Palo Alto, Hillsborough and San Francisco Concours d’Elegance shows. But this is not a ‘trailer queen’ that never gets driven on the highway. 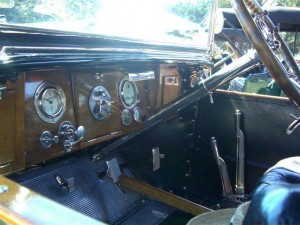 In those days, having a right hand drive like this was not that unusual. Some cars even had the driver sit in the center. Note the fine wood dash and the aluminum floorboard for the driver.

His dad drove it to about a dozen events that were 200 to 350 miles away.  He even beat Reno casino owner Bill Harrah in a classic car drag race with his Olds.  J’s mother tells of a time he was heading downgrade from Silver City, Nevada, and wanted more speed than the 60 mph it would do with an overdrive, so he kicked it out of gear.  When he tried to put it back in gear to slow down, the balky cone clutch would not cooperate.  Stopping this heavyweight with two-wheel, outside-band brakes, while fighting to steer it at high speed, was quite a challenge and almost scared his mom to death.

Another great story is when his dad went to a charity event to help drive celebrities in a parade.  He loved seeing how all the people wildly waved at his Olds and him, especially the younger ones in the crowd.  He was a little disappointed when J told him it was probably his passenger who was getting the waves, someone named Madonna.  Since his dad’s passing, J currently has it displayed at the famous Burlingame car museum, the Candy Store.  But J, like his dad, still drives it to shows around NorCal and enjoys cruising along in his merry Oldsmobile.

1 thought on “In His Merry Oldsmobile”