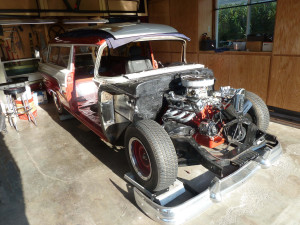 When working space is tight, it is very important that everything is kept orderly and clean. That’s how T runs his garage. Ford?s two-door Ranch Wagon predated and antedated Chevy’s Nomad, being built from 1952 until 1961.

In the early days of hot rodding, guys would build their cars from parts donated by several other cars or fashioned from scratch.  The work was often done in cramped garages with not much room to work and no fancy equipment.  T started out that way and is still following that tradition.    When T and wife D saw a ’57 Ford Ranch Wagon at a car show about four years ago, they thought owning one would be  cool because it could haul all the luggage as well as golf clubs and stuff, take all the toys when we went on a trip in my toy. “It was hot rodded and ?in the weeds” (lowered and customized), making it very appealing to T.

At the time the Fords were much more reasonable than the other, more famous two-door station wagon of the era, the Chevy Nomad. But T was not in the market at the time.
When he decided to buy one about a year ago, the price had gone up three times what it had been. After much looking, he found one, a Del Rio model with the original 223 CID six-cylinder engine and a three-speed manual trans, for sale in Vegas.  What was for sale in Vegas didn’t stay in Vegas.

Although T feels he paid too much for it, the body and frame were sound and it was running. But that didn’t last long, because T  planned on first fixing the brakes and things kinda got out of hand.  Instead, he pulled the engine and trans and sold them. And then the hot rodding began.

For an engine, he chose a 351 CID Windsor from a Merc Cougar with a C4 auto trans from a Ford van.  The steering is rack and pinion from a Chevy Cavalier mounted with custom-made brackets, courtesy of his fellow Roamin Angel, Lanny? The front disc brakes came from a ’78 Lincoln Versailles and the tilt steering column is GM. The rear end is the original 9″ Ford, but rebuilt with ‘road gears,’ i.e., a low ratio like 3.00:1 for freeway cruising. All did not go without a hitch, however. T had the engine in and out three times: first because the oil pan had to be changed from a rear to a front sump one, second  to raise the engine so that the headers wouldn’t hit the frame and last to move the engine a half inch to the left by making adaptor plates for the motor mounts. But it finally all works together.

Then came the interior. After gutting it, T stripped all the interior trim and painted it with etching primer to remove any rust before painting it black. A Pontiac GTO donated the bucket seats, which will be re-upholstered. He is part-way though building a one-off console to go between them. The dash is a custom, oak-inlay one that will house Autometer gauges. New Relic power windows are in the works.  To keep it really cool, T lined the entire inside with Dynamat-type insulation and is installing Vintage Air air-conditioning.  For exterior paint, he is thinking about pearl white with metallic gray trim, but says that that ‘will probably change about fifteen times before it gets done.’

To say his project has turned into a lot more work than he planned would be an understatement. Everything became a major project, right down to redoing the door hinges. Although T feels he is doing well, he cannot promise it will be done in the coming year.  Too many problems might crop up and his working conditions are tight. And it is about fifty years since he started building rods that way and his joints have gotten a little stiffer.

“It’s fun,” he said with a grin, “but I wish I had a lift so I didn’t have to do everything lying on my back.”