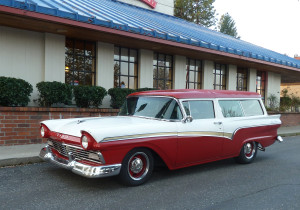 One fun part about writing this column is seeing a work-in-progress become a restored classic or street rod. Since the process can take years, there might be a bit of a wait. T’s ’57 Ford Ranch Wagon was featured as a work-in-progress back in December of 2011. Now it’s here again. The first time, the photo was of a car that had no front clip, the engine without fenders or grill around it. The hood was sitting on top of the car. Such niceties as doors, windshield, wiring, hoses and a radiator had not been installed. There was still a lot of progress to be made before it cruised down the highway.

Up to that point, T had had many problems in converting from an inline 6-cylinder engine with a manual column-shift trans to a 351 CID V-8 with a C-4 auto trans.  T had put the engine in three times only to have to take it out again to change something.  First the oil pan had to be swapped from a rear sump to a front sump one. Then the engine had to be raised so that the headers would clear the frame. Finally, custom-made adapter plates had to be installed for the motor mounts to move the engine a half inch to the left. All that was accomplished by the time of the last article. But the problems didn’t stop there.

Working with limited space, T stored the front clip (all the sheet metal from the cowl forward) outside under a tarp. When it rained heavily, T would clear the water off the top.  What he did not expect was that the water that accumulated before he removed it would have enough weight to be an issue.  However, it was enough to force the fenders to bow in at the bottom, so when he went to put it the clip back on the Ford it wouldn’t fit. Grunting and groaning, he was able to pull them back apart enough to slip the front clip back in place. He says that the final work to make them fit perfectly will be done when he gets the car repainted, but at least the hood now fits properly and it looks okay for now.
Another problem cropped up when he tried to install a new electronic distributor. The riser was too tall on the intake and did not allow enough rotation to set the timing. Using the old distributor and the new one, fellow Roamin Angel Lanny built a custom one that would work.  No mean feat.

The main unresolved issue is that the new, universal-type aluminum radiator just isn’t cooling well enough. T’s decided to bite the bullet and pay to have a custom-made one. That should solve the last major problem with his Ranch Wagon.

Although T laughingly says that, “Everything was a problem,” a lot of the work he has done since the last article went smoothly. He wired it with a universal wiring kit and that went well. He finished the custom console and oak-inlay dash with Autometer gauges without a serious hitch. The Vintage Air air conditioning is now finished and works very well, as do the New Relic power windows.  So T is now driving his Ranch Wagon from Lake of the Pines to IHOP on Friday mornings for breakfast with fellow Roamin Angels.  And, T says, he also has ‘a place to carry my golf clubs. ‘

There are still a couple of things T plans to do to his Ford before he and wife D go on any long runs with with the Roamin Angels, like the interior and paint. The interior is not finished, with no carpet or new upholstery. And he is still not sure about paint color, with a lot of Angels urging him to keep the car’s current red and white motif. Wait another year or so and you might read about his ’57 Ranch Wagon’s- Part Tres.