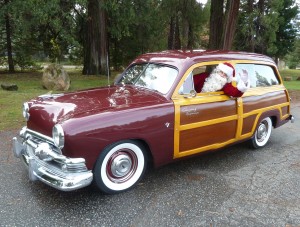 While Santa may call it red, this Woodie is actually Mexicali Maroon Metallic. It is the first Country Squire and the last actual wood Woodie. Faux panels in plastic or metal came after that.

When N and I met with Santa at IHOP on Friday after the Roamin Angels’ breakfast gathering, he was a right jolly old elf.
“Okay, Santa, why are you grinning like the Cheshire cat?” I asked.
He blew on his mug of hot cocoa as the steam encircled his head like a wreath, then gave me a wink. “Because N just let me take a spin in his ’51 Ford Country Squire Woodie.  I haven’t driven one of those for over sixty years.  It’s all original. That flathead V8-BA engine is pumping out 100 horses.  What a hot rod!?”

N chuckled. “Maybe for you, Santa, but when I drove it home from L.A. after I bought it this year, I had a hard time keeping it up to 45 MPH over the Grapevine.  That Ford-O-Matic auto trans didn’t help.  It slips when it shifts way too much.

“Well,” Santa mused, laying a finger aside his nose. “It’s still a great toy for an older boy.’ But we need Christmas toys for younger boys and girls at the 23rd Annual Roamin Angel Toy Drive on December 1st at the PG&E parking lot on Taylorville road, across from K-Mart.” His droll little mouth drew up like a bow. “But if you aren?t happy with your Woodie, I might be interested in buying it.”

Holding up his hands, N said, “Hold your reindeer, Santa. My wife was so mad when I sold our ’51 Ford Woodie we had from 1998 ’til 2005 that I thought she was going to knock my head off. She may be petite, but I wouldn’t want to cross her twice. Besides, I sort of regretted selling the old Woodie, but some surfer in Cayucos made me an offer I couldn’t refuse. But this one I’m going to keep.”

Giving a nod, Santa asked, “Will it be at the Toy Drive on December 1st?  I understand the Roamin Angels put on a mini car show with lots of cool rods and classics. Will your Woodie be there?”

N grimaced. “Uh, probably not. You see I sold the engine on Craig’s List.”

Santa raised an eyebrow. “The engine?”

“The engine.” Norm shrugged. “I want to take the Woodie on long cruises.  I’m going to drop in a 302 CID Ford engine with an AOD overdrive auto trans.  It may not be stock, but I’ll be able to keep up with the other Angels for the long runs.”

Santa laughed and his little, round belly shook like a bowl full of jelly.  “Well, at least you’re keeping a Ford in a Ford. But you’ll be there in a different car, won’t you?”

“I sure plan to be,” Norm said. “After all, there will be a lot of free food for everyone as well as you, Santa.  Hot dogs and the fixings, as well as free popcorn, biscotti, and candy.  The Salvation Army will have their canteen truck, filled with coffee and goodies.”

With a wink of his eye, Santa said, “Sounds like my kind of party.  But what about Christmas gifts?

“Not a problem.  There are going to be raffles with prizes from local merchants for those who donate an unwrapped toy or cash.”

“Well,” Santa said as he arose. “Looks like the Roamin Angels have it all ready.  I just need to be there from ten in the morning until two in the afternoon on December 1st.”

He went out the door and hopped into a red ’65 Ford Cobra.’ And I heard him exclaim as he fired up his 429, “Happy Christmas to all, and thanks to the Roamin Angels.”
I just hoped the CHP would take it easy on the jolly old elf as he headed down Highway 49.