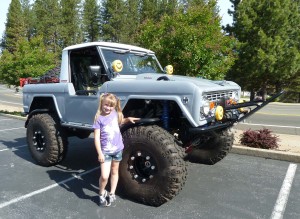 Miss Sophie with her ’72 Ford Bronco rock-crawler, a classic case of ‘Beauty and the Beast.’

As a father-son project, in August of 2005, John Link and son Dustin decided to ‘build a rig,’ a rock-crawler. Dustin chose an early Ford Bronco, no doubt influenced by stories of the one his father had once owned years before. John says he had ‘no idea what had happened to the value’ and was shocked at how expensive they had become. So they settled on a ’72 Ford Bronco that John said was a ‘complete rust bucket.’ But it was in the right price range and ran well enough to drive on and off the car trailer. Within an hour and a half, John and Dustin had it ‘stripped down to the frame’ and ‘from that point on, it became a vision.’
Since John had no fancy shop with a car lift or plasma cutter, all of the work was done in what John termed ‘ranch style’, with 99% of the work done in the driveway.  He had a hand-held band saw, a hand grinder and a good welder, plus a friend with a tube bender. John said he must have put on a thousand miles just running tube to be bent back and forth to his friend’s house. He and Dustin  warmed up  the 302 CID engine and installed a New Process 435 4-speed trans from a one-ton Ford truck with an Atlas transfer case for the four-wheel drive behind it. Power to  home brew  40″ wheels was delivered by a Dana 44 in the front and a Curry Ford 9″ in the rear. They hand-built a chrome molly suspension for  extreme durability,  using 18″ Stroker shocks. Besides replacing several rusty body panels, they tubbed the wheel wells and stretched the fenders to allow clearance for bigger tires while keeping a lower center of gravity. They custom-built the hood scoop and half doors. It was running and driveable,  about 85% done,  when Dustin unexpectedly passed away in January of 2008 at the age of 16 years old.
Without his partner on the project, John lost all interest in the Bronco. It sat in the driveway for about a year, with nothing more done on it. Then friends of Dustin came by and said, “Hey, old man, it’s time to bring it out.” They persuaded him to finish the Bronco in Dustin’s memory. With their encouragement and help, he finished the job. “It’s been great for me,” he said. As a rock-crawler, the Bronco performed well and he drove it on off-road treks. But then someone else took possession of the Bronco: John’s seven-year old daughter, Sophie.
Sophie decided that they needed to enter the Bronco in a car show. But their rock-crawler was built for ruggedness, not for show. It didn’t have fancy paint or a shiny Billet-aluminum accessorized engine. He told her, “If we go with the Bronco, they’re going to throw rocks and tomatoes ’cause it (the car show) is for hot rods.”
But Sophie wouldn’t take no for an answer. “She worked on me for three weeks and I caved. It was one of the most wonderful things I’ve done. She worked her butt off (getting the Bronco ready). My son would have loved it. It was like passing the torch.”
In a Hallmark moment, they won first place in their category and have since won two more firsts at other shows. But for Sophie, that wasn’t what it was about. “Winning an award or not winning an award doesn’t matter to Sophie,” said John. “It’s the fun of having her Bronco in a show.  She’s taken ownership and does a tremendous amount of work getting the Bronco ready for these shows.” John and Sophie joined the Roadents car club. “She’s the youngest member and thinks it’s a hoot. She’s seven and a girl, but she’s into it off the deep end.  In fact, she’s the motivator for them to drop by the Cars and Coffee in front of the Daily Donut in the K-Mart shopping center on Saturdays from eight until ten in the morning. John feels that it’s Sophie?s Bronco and she lets him chauffeur her around. “It’s like ‘Driving Miss Daisy,'” he laughed.