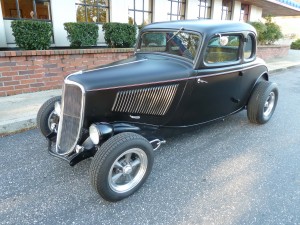 Although Ford’s Model B was made from 1932 to 1934, the ’33 Ford had a longer wheelbase and dramatic changes to the hood line, with an artistic ‘shovel’ grill. This coupe is a highboy, which means the body sits on top of the frame rather than being ‘channeled’ to drop around the frame.

Why does a guy build a street rod that he knows he can never sell for a real profit?  For Roamin Angel B, it’s the enjoyment of the process itself of building the car.  Plus, he says, “I love just seeing if I can do it (build a rod).” He’s built twelve street rods since 1972, always selling the one to finance his next one.  The last one he sold, a masterfully-done 1933 Willy’s sedan with a Chevy drive train, was the first one he sold for enough to cover parts plus a little left over.  But not nearly enough to pay for the hours of labor he spent building it.  Unless working for pennies per hour is decent pay. Still, he does not regret all the work.  Now B has completed his latest project, a ’33 Ford fenderless highboy coupe.
Fellow Roamin Angel S bought the coupe a few years ago to have built into a street rod.  It was in rough condition, but he felt it had potential. By about a year ago, he had it on a new TCI frame, with coil-over suspension, four-wheel disc brakes, and a dropped front axle with rack and pinion steering.  The rearend was a nine-inch Ford. The engine was a ground-thumper 327 CID Chevy that B had assembled for him. It had a radical roller cam and Edelbrock aluminum heads with a rumpity-rump idle.  It was mounted with a 700R4 auto trans.  It was far from finished, but could be rolled around on its own wheels.  After having had many trials and tribulations in getting it that far and with a lot of work still to be done, S decided to sell it last year.  B has long liked the old Ford coupes, so he sold his Willys and bought it.
B jokingly describes the condition of the ’33 Ford as “complete except for everything that costs money.” Things like garnish moldings, door latches, all windows, the wiring and the complete interior were missing.  Most parts were available for someone willing to search, but not cheaply. Although B is an experienced rod builder, the doors were a challenge. The car had ’34 doors, but the upper frame around the windows had been replaced with a section from a ’33 door.  Since ’34 had been the first year for the so-called ‘smoker’s window’ that would slide back a couple of inches if the crank was turned a certain way, B had to make all new channeling so that the window would go up and down in the ’33 frame.  There were no books or Internet sites to tell him how to do it, so it was all by creative engineering.

Rods are very personal and B made some changes to what had been done.  He removed the fenders and running boards to make it like a Fifties-style rod.  The center of the top was originally fabric over a wood framework and B welded a metal piece on the top to replace it.  The engine was too radical for everyday street use.  S had talked of driving it to New York if he had finished it rather than selling it.  With that engine, B says, “he’d have been lucky to get three miles to the gallon.” It would have been a costly trip.  So B detuned it, installing a more streetable cam.
Although friends tried to persuade him to chop the top to lower the profile, B did not and is very happy with the comfortable Glide seat that gives good visibility.  He painted it ‘hot-rod’ black with a touch of pinstriping.  Without the help of his good friend, fellow Roamin Angel B, B says, it would never have been finished in a year.
“I don’t know that I’ll ever do another one again,” he said.  But he did add, “Of course I always say that.”