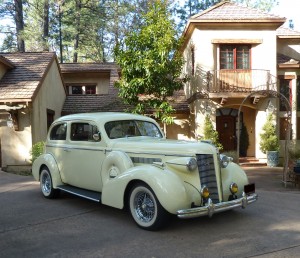 This ’37 Buick, with the highly-desirable side-mounts, proves that looks are deceiving. The chrome wire wheels with radial tires are the only obvious giveaway that it is a ‘resto-rod.’

It starts when you first raise your hand.  The auctioneer catches your bid and you are committed.  Then someone tops your bid.  Suddenly someone appears at your side, encouraging you to up your bid.  You raise it.  You experience the thrill of competition, even an bit of an adrenalin rush.  Unlike eBay, this is live and intense, even personal if you see your opposition.  For car afficionados, the ultimate experiences, the apex of auto auctions, are run by Barrett-Jackson.
Roamin Angels Vince and Saundra went to the Barrett-Jackson Auction in Arizona, hoping to buy a car.  Scottsdale’s Equestrian Center sees more horsepower in that one event than all the rest of the year combined.  And expensive ones, too.  The car before Vince’s was a ’57 Chevy convertible that exceeded 100 grand.
“You’d think it was Monopoly money,” Vince says.
When Vince and Saundra saw the ’37 Buick Series 40 trunkback sedan go on the block, it was just what they wanted.  Vince liked the late Thirties classic look of sweeping lines, but wanted the ‘creature comforts’ of a modern car.  This Buick was a ‘resto-rod,’ with a stock-looking body and modern drive train.  It had a ’70 Buick GSX 455 CID engine with a Turbo 400 auto trans, plus power steering and brakes, and air-conditioning.  It even had a ’72 Nova front clip, providing better steering and disc brakes, and a ten-bolt GM rear end.  The electrical had all been upgraded to 12 volt, with a modern stereo.  Yet, the exterior and interior looked stock.  Inside, it had all been refurbished, including the original gauges and faux burled-wood dash.  Although they had not come to buy a Buick, Vince says it was just what he wanted, “interesting looking and unique.”
Once the auctioneer saw him as a serious bidder, an assistant stuck to him like glue to make sure he kept bidding.  With the auctioneer’s machine-gun chatter, it was hard to keep track of the bid amount.  V says it was like a circus.  With S’s urging, Vince stayed on top and won the Buick.  After they bought the Buick, Saundra got in line to buy a hot dog.  When the seller told her it would be five bucks, she said, “No way. Paying a lot for a car is one thing, because you will be driving it for a long time.  The momentary pleasure of a hot dog is another.” When the man behind her saw her buyer?s tag, he said, ?Allow me, and bought it.
Too often cars purchased at auctions result in ‘buyer’s remorse.’ Not so with them. They both love it.  That is not to say it has not had a few problems.  The gas gauge didn’t work and the tank had a leak that only was a problem going uphill.  The result was that Vince was stranded on the road a few times, out of gas, while going up Highway 20.  He did get to chat with nice people who stopped to see if they could help.  Fellow Roamin Angel D fixed those problems.  It still has a few issues with overheating inside.  The GSX was the hottest engine Buick ever made, figuratively and literally.  The ’37 Buick was not made to handle that kind of heat and a lot of it flowed back.  Vince says he normally had to run the A/C to keep it livable inside.  He thinks that has been solved by a good tune up, but time will tell.
Since buying the Buick, Vince and Saundra have not gone on any long runs.  Now that their rod is not running out of gas, they’re revving to go.  That’s one of the main reasons they joined the club: to cruise with the Angels. And they’re glad Vince stuck his hand up in Arizona.