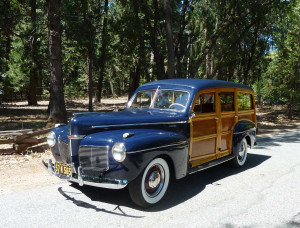 1941 was the first year the Mercury built woodies, and only 2,143 of them. With a period-correct Columbia Overdrive, this classic keeps up very well on the highways.

It’s hard to find fault with W’s ’41 Ford woodie.  After all, the paint, wood, interior, engine, etc. are immaculate.  It looks perfect.  However getting the Merc to such a condition was long, hard and costly.
It all started four years ago when W and S were at a show in SoCal with his 40′ Merc convertible and a friend told him about a Merc woodie not too far away he should check out.  So W did just that and liked what he saw.  Although it had been sitting in a barn for thirty years, it had possibilities. The most difficult and expensive part to restore on a woodie is the woodwork.  If the wood is completely rotted away, making a pattern for the pieces is well nigh impossible.  But only two pieces actually needed replacing.  The metal body was rough, but it is much easier to repair or replace those parts than the wood.  It still had the stock flathead V-8 and was basically a complete car, if not exactly in show condition.  So W made the deal and the work began.
For the woodwork, he went with a well-known  woodie man.Although he refused to give an estimate, insisting upon ‘time and materials, and pay as the work progresses,’ he did agree that W’s projected cost was about right because the wood was in such good shape.’ As time passed and bills continued to mount, W began to get nervous. Costs hit W’s projection with the work far from complete. When he tried to apply a little pressure, the woodworker told him, ‘Just pay me the rest for what I’ve done so far and haul it out of here.  Since finding someone to finish a job properly that some other guy has started is difficult at best, W left it there.  After paying for work done to date.  When it was finally done, the wood was nearly perfect.  But the final price was more than double the  projected cost.

The rest of the car was no picnic.  W spent 450 hours scraping, cleaning, repairing and refinishing the frame alone.  The fenders had what W calls a ‘tinshop’ repair: rusted-out sections had pieces of tin pop-riveted on and bondo smeared across to smooth it out.  He found some NOS (new old stock) fenders to replace them.  He located a ‘donor’ ’42 Ford so that he would not have to use inferior ‘Made in China’ replacement parts. Then there was the drive train.

When it came to the engine, W decided to up the horsepower of the 239 CID, 100 hp mill since it would not show on the outside.  He had it bored and stroked, giving the flathead V-8 260 CID.  But the starter locked up at a Palo Alto car show as he was going up for a trophy and he had to be pushed across the staging area.  The announcer said it was the ‘greenest’ car at the show since it was putting out zero emissions!  W found that the engine builder had used the old ring gear that had missing teeth.  The builder sent a replacement ring gear and a ‘sorry ’bout that’ note, but W had to pull the engine to replace it.
The journey to making the Merc woodie so perfect, down to the proper nuts and bolts, was not a smooth and easy one, (W calls it an ‘endless challenge.’) but W and S feel it was worth it. The Merc scored a perfect 1000 points out of 1000 possible for technical correctness as well as the esteemed Dearborn Award at the Western National Early Ford V-8 meet in Utah.  This year it has won awards at such prestigious events as Palo Alto Concours d’Elegance and even First In Class at  Hillsborough Concours d’Elegance, where he competed against multi-millionaires who blindly throw money in their restorations.  He even won the only non-‘Celebrity Award’ of only thirty-two given at Hot August Nights, the National Automotive Museum Award.  Interestingly enough, it died while getting that trophy because ethanol in the gas caused the fuel lines to collapse.
But for a few judges such perfection is a fault. They want to heavily penalize him.  You see, this was an assembly-line car and Henry Ford was concerned more about churning out his cars quickly and efficiently than how perfect the paint was or how well the door fit.  They want that quality of fit and finish.  W’s philosophy is different.  He says, “Henry’s dead.  I’m not going to do a lousy job.  I’m going to do it right.” And right, to W and S, is better than new.