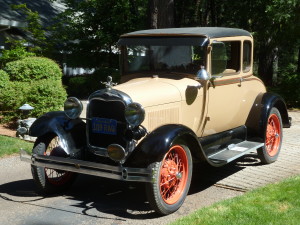 1928 was the first year for the Model A. After the waning of the Model T’s success, Henry Ford produced a car with more a conventional drive train and body styles. Sales skyrocketed, with a million sold by February 1929.

Writing about a car whose owner has no real history with that car can be a challenge.  If that person just went out and bought it, never doing any work on it or even having any work done on it can make a boring story.  But that is just what this story is about.  To make matters worse, I am that owner.  But I have one advantage: the previous owner of my ‘new’ Model A has a great story with the car.
Back when Mike C was a kid, the Model A was sitting in a local field with a small cottonwood growing up right through the roof.  He says that he once threw a rock through the window for no real reason, but often sat inside, playing like he was driving.  When he was fourteen years old in 1965, he asked the owner if he could buy it.  Yes, for $100.  Mike got it on lay-away.  For about a year he cut lawns and paid the owner.  By then he had paid $50 and the owner let him take it home.  He finished paying for it in 1967.  The steel coupe body was in good shape with no serious rust.  The engine would turn over, but not run.  Although mostly there mechanically, it had no interior, roof or gauges.  Plus there was the broken window to replace. As he got working on it, Mike found that the first and second gears were shot, due to the Model A’s earlier life pulling a plow in the Oklahoma Dust Bowl.  The rear end and king pins were still good, since it had seen no high speeds in front of a plow.
Mike set to work and got it in decent condition for the local Fourth of July parade in 1972.  Although it was only painted with red primer, he decked it out in American flags and bunting and it was a hit.  He did discover one problem: the engine was so worn out that it almost shook the fillings out of his teeth at any speed.  So Mike got it rebuilt and also painted it in a blue/ green/ black motif that had been popular in 1928.  Over the years he has kept improving it, including rebuilding the trans and repainting in its current tan and black.  So why sell his first car, his beloved Model A?  To make room to restore a ’31 Deluxe Model A roadster that he had stored for many years.
And now for the rest of the story, my part.  I started driving cars in the Muscle Car era and mine have almost all been of that ilk.  I have always loved cars like the Model A, but never had one.  So when Mike told me he was selling his coupe, I grabbed it.  I am having to learn to start a car that you retard the spark and adjust the air-fuel mixture from inside before pressing the start button on the floor. Then readjust the spark and mix.  It does have cruise control of a sorts in the form of a hand throttle on the steering column.  The 201 CID L-head four-banger puts out 40 HP with good low end torque.  That means you don’t rev it like a V-8 to start moving or before shifting.  With no syncros in the trans, you double clutch both when shifting up or down.  Handling on curves is not too hot with its high center of gravity.  With its 3.7:1 rear end ratio and low RPM range, it is not a ‘freeway flyer,’ but it’s great for idling along in first for parades.
So if you see a grey-bearded guy grinding gears in a Model A coupe with a pained grin, you will know it’s me, learning to drive all over again.  And, yes, I will be having fun.