Local author and The Union columnist, Ron Cherry, has released his new book called, “The St. Nicholas Murders.” We snagged a few minutes of time with Cherry and asked him a few questions about his latest book and his life.

Can you tell us a bit about yourself?

I am both a left brain and right brain thinker. I have a BS in engineering and an MA in history. I have been married for 46 years, to the same wife, even. Her name is Kelly, my muse and one of my editors.

We have one daughter, married.

I love classic and collectible cars and started writing a weekly column about local cars and their owners for The Union over 11 years ago because of my association with the Roamin Angels Car Club.

I am active in the Gold Country Celtic Society, the Sierra Writers, the Salvation Army Advisory Board and my church, Trinity in Nevada City.

What brought you this area?

A rental car. Oh, you mean what motivated me to move here? I was born and raised in SoCal. The last 13 years we lived in Lake Arrowhead, but it was becoming very crowded.

We moved to the Isle of Man in the British Isles, one of the seven Celtic nations. When we moved back to the States, I wanted big trees and some snow in California, but away from SoCal.

My best friend from high school had seen the area and suggested it. The rest, as the cliché goes, is history.

How did you get into writing?

I started writing short stories when I was in high school, mainly sci-fi, but felt I needed to have a “practical” job. After I retired, I had a dream of a Chicago cop getting shot on the sleety streets of Chicago. That inspired me to write a short story about it.

When I finished the story, I realized it wasn’t really finished. It became the first book I wrote, “Foul Shot.” It’s the only story or book I ever wrote because of a dream. Since then, I got into writing mysteries, a great love of mine, and wrote a Celtic historical novel.

The latest one I wrote. Not really, but it might get people to buy it, right? I can’t say I have one favorite book or author. If I have one today, it might change tomorrow.

I have a number of authors I have greatly enjoyed reading. They vary from Shakespeare to Dickens to Trollope to Hemmingway to Follett. They are very dissimilar and which one prefer depends on my mood.

Then there is the detective genre, which I enjoy for light reading. They include Doyle, Hammett, Chandler and some Parker. I am only mentioning the authors of fiction here.

What is your book about?

My latest is about a young, handsome Episcopal priest (they can marry) who receives a mysterious phone call that leads him to believe a murder has been committed in the small town in the Sierra Nevada Foothills where he lives.

Knowing that the police will not take him seriously, he sets out to solve it himself and almost gets killed a couple of times.

It is my first “cozy mystery,” which means no graphic sex, bad language or gory violence. However, that doesn’t mean no action or suspense.

What inspired you to write this book?

Living here. It takes place in the fictional town of Buggy Springs that is in the fictional county of Pike, but has strong similarities to Nevada City moved to the remoteness of Downieville. All places and people in it are fictional, though.

While inspired by real people and places, I change them, tweak them, and combine them to make them realistic fiction. I did use a painting of Trinity Church in Nevada City to represent St. Nicholas of Myrna in Buggy Springs, Father Bruce’s church, for the cover.

After reading books like the Father Brown mysteries with wimpy, middle-aged priests, I wanted a young, studly priest who could defend himself, if he had to do so.

What do you find most challenging about writing a book? 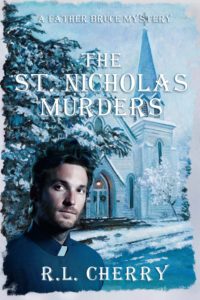 Getting into the mind of my characters. Once I do, the dialogue flows and sounds natural. They also have a mind of their own and tell me how they will react in various situations. It helps guide the plot.

One of my biggest peeves is books that have stilted dialogue and/or characters who are not consistent.

Having an auto mechanic who suddenly can pass as a ballet dancer and quotes Emily Dickinson just doesn’t cut it unless you’ve already established that, say, he had secretly studied ballet in high school because his dad didn’t approve and memorized because it could not stop for death to impress his girlfriend.

For me, even that’s a stretch. But maybe that’s because I can turn a wrench but cannot perform a pirouette and am not into Emily’s poetry.

What is your key takeaway or message you hope readers find in your book?

That they had a good read. I’m a storyteller, a raconteur. I do not write “serious literature.” I spin yarns with a touch of humor. Sure, I do convey a philosophy of life by the very nature of my stories, but I don’t preach.

My goal is to have the reader say, “Wow, that was enjoyable,” when he or she finishes one of my books. While people do die in my murder mysteries (I had one reviewer upset because one relatively minor character was murdered), they are not tragedies.

Where can people find your book?

Amazon, both in paperback and in Kindle.

How would you describe your own perfect day?

One where I wake. That really helps. Small victories are still victories. Then, when there are no tragedies for me or anyone I know.

Next, I accomplish something. It may be doing some good for others. It may be fixing a problem or something that’s broken. It may be writing my column or a few more chapters on my latest book. Something accomplished.

As you get a little older and, hopefully, wiser, your standards for “perfection” lower. Then again, having news my book is a best seller would definitely go a long way toward making a perfect day.