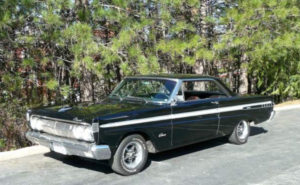 Considered the second generation Comet, the 1964 to 1965 models had a squarer look than the first ones. The Caliente was made from 1964 until 1967.

Like many gear heads, Roamin Angel Larry Johnson has owned many cars over the years, often restoring them. His range of interest is wide and so has been the variety of cars he has owned.

For the last six or seven years, however, one car has been on his mind: the Mercury Comet in general, the Client model in particular. When Larry had gotten out of the Air Force many years before, he had purchased a ‘63 Falcon Sprint and wanted something similar.
“I loved the roofline and the Mercury Comet Caliente was a fancier version,” he said. “The Caliente had more elegance than the Falcon.”

Plus the Caliente is rarer than the Falcon.

“You never see a Caliente on the road,” he noted.

However, after six or seven years, Larry had pretty much given up on finding one in decent condition for a decent price. Then he got a call from fellow Roamin Angel Ed Johnson (no relation) in January of this year.

While vacationing in SoCal, Ed saw an ad in a magazine for a ‘64 Mercury Comet Caliente. Knowing Larry’s interest, he let him know about the Caliente.

Larry had a friend in SoCal go to Indio, where the car was located, and check it out. It had a K-Code 289 CID engine with a C-4 auto trans.

Unlike the Mustang K-Code, Comet’s K-Code was rated at a lower 210 HP and did not have solid lifters, but still was a peppy engine for the day.

It had factory bucket seats, center console and full gauges.

Since this was the era of “idiot lights” that told of a fatal engine problem rather than warned of an impending one, that was important.

His friend said the body and interior were in great shape.

“After a half a dozen conversations with the owner on the phone, I took my car trailer down there,” Larry said.

When he got there and did his own evaluation, Larry was pleased.

“The body never had a dent, no Bondo or rust,” he said. “Even the trim pieces had no dents.”

The interior had been redone in “tuck and roll,” but was in great condition, without any wear or tears.

“Then being black, I loved it,” he recalled.

The only real issue he had was the sound system.

Although the original AM radio was in the dash, an aftermarket system with “huge speakers” and trunk-mounted amps had been installed. In fact, the kick-panel front speakers were so large that they impinged on leg room.

“I’m too much of a (baby) boomer,” Larry mused. “I’m taking that stuff out. I’d rather hear the engine.”

The deal was made and Larry hauled his Caliente home.

After he got home and fired up his new Caliente, he didn’t get far before it stalled, starved for fuel.

It turned out that the gas tank, fuel filter and carburetor were clogged with an unidentified white powder.

Although the Mercury had originally been sold in Indio, it had only recently been brought back there after spending 20 years in a climate-controlled warehouse in Guadalajara, Mexico.

Larry never had the powder analyzed, instead he cleaned out the gas tank and blew out the fuel lines before replacing the fuel filter and changing the carburetor to a new 600 cfm Edelbrock.

His Caliente has not had a relapse since.

One of the first things Larry did was to replace a number of minor parts that had previously been replaced using anything at hand with “proper parts.” Then he took the Caliente to Mustang Corral for some front end work.

“They did sort of like Carroll Shelby did to the Mustang,” he said. That included dropping the front A-frames down, which lowered the front and improved handling.

He has other plans as well, the first ones being changing the trans to a 5-speed manual T-5 and adding under-dash, stock-type air conditioning. After that, who knows?

“I bought the car for the body, the way it looks, not the mechanics,” he said.

Larry did have one disappointment.

When he went to the DMV and applied for a personalized plate of “MUY HOT,” it had already been taken.

“Caliente means hot in Spanish,” he explained. “Now I’m looking for something similar.”

If you have a suggestion, some Saturdays you can find Larry at the Cars and Coffee in the K-Mart shopping center from 8 a.m. ‘til 10 a.m., having a hot coffee.

Ron Cherry’s latest novel, a Celtic saga entitled Three Legs of the Cauldron is on Kindle Scout. Nominate it at https://kindlescout.amazon.com/p/2IBYO86OHTMBB and get a free Kindle download if it’s published by them.
October 23, 2015