Many people may not know what a Christmas cracker is.  If you’ve ever lived in the British Isle you will, of course, be very familiar with these holiday treats.  However, since it is the title of my book, I need to make sure everyone knows exactly what a Christmas cracker is.  It is a cardboard tube, usually about an inch or more in diameter and six or more inches long (much like a an empty toilet paper roll, if you’ll pardon the comparison), that is wrapped in Christmas paper and twisted shut at both ends. 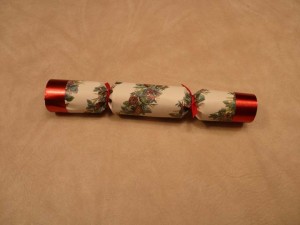 Inside are normally a joke or two (often trite and not very good), a paper crown of some sort and a toy or trinket that can vary from a Cracker Jacks-like piece of junk (like the use of cracker again ) to a Tiffany bracelet. The price of the cracker, obviously, is the major factor in the quality of the toy or trinket. Normally the person next to you grabs one end of your cracker and you grab one end of the cracker belonging to the person on the other side of you.  Then everyone pulls at the same time. ? The Christmas crackers pull apart with a loud pop, caused by a cap-like explosion.

This one is a rather cheap Christmas cracker that I was willing to sacrifice out of the Christmas season as a demonstration.  This toy train engine would not survive the day and is definitely not suitable for small children. 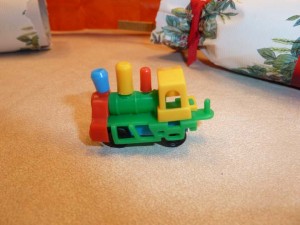 Then everyone puts on the paper crown.  I have been with bankers and stock brokers at Christmas parties on the Isle of Man and they all put them on.  I’ll bet the Queen even wears one and makes the family do so as well, including Prince Philip!

After that, people read their jokes and groan.  The jokes in this cracker read:  “What do they sing at a snowman’s birthday party?- Freeze a jolly good fellow.” and “What does Santa Claus use to weed his garden?-Hoe, Hoe Hoe.”

For more on Christmas crackers, click on the name here.

By the way, the title, Christmas Cracker,  is a double entendre, since in this case the other British idiomatic usage of cracker is for a person who does something very well.  Then again, it is a triple entendre, in that Morg cracks the case.  She’s a cracker twice on.