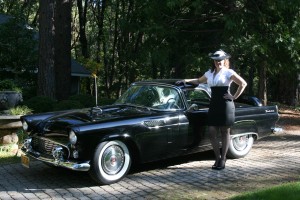 Cruising around in a classic car with a classic outfit is the ultimate in “retro.”

Car songs of the 50’s and 60’s often hit a chord in the hearts of certain Roamin Angels.  For some, it’s “Hey, Little Cobra.”  Others like “Little GTO.”  Vette owners love “Shut Down.”  For N, it’s “Fun, Fun, Fun,” a song about a girl with her daddy’s T-Bird.  She wasn’t even born when that song came out, but it is her theme song.  One of her early memories is riding in her father’s ‘56 T-Bird and being so little that she could not see over the dashboard.  Having a father who loved cars all his life, it was only natural that she would want a classic or rod herself.  She even put it on her “want” list (bucket list for the younger crowd), but did not expect to own one until she was a bit older.  So when her father offered her his ‘56 T-Bird, she did not believe he was serious.  Although he has always been a bit of a joker, just pretending to give it to her would have been a cruel jest.  But he was serious and now she has her own T-Bird.  So why would a young woman prefer an old American “clunker” to a new import, and this ‘56 T-Bird in particular?  Here are a number of reasons.  One, she loves collectibles handed down in the family, whether it be lockets, photos or cars.  Two, she loves the 30’s to the 50’s, when women dressed classily and she does the same while cruising in her ‘56.  Three, she loves the idiosyncracies of the car, like putting it in neutral and pumping the gas three times before starting. Four, she loves the black and white “tuxedo” interior and dresses accordingly while driving it.  Five, she loves the look of the ‘56 T-Bird with a porthole top and the continental kit that give this car such a classy style.  Six, she loves that she was given it to drive, not park in a garage and keep show-room fresh.  And drive it she does.  Although she only cruises around Reno where she lives, she drives anywhere around downtown where she can be sure of a safe parking space and often takes it to American Iron gym, where she exercises.  It is an old-school gym, with free weights and pictures of Betty Page and Marilyn Monroe on the wall.  She parks it where she can see it from the window and often gets comments from guys who exercise there.  Older guys, she has found, who remember seeing Birds like hers cruising around town years ago.  But they’re not “hitting on” her, just reminiscing, so she doesn’t mind.  It’s a normal thing when you drive a car like hers.  So if you see a young woman with long, dark hair cruising around in a black ‘56 T-Bird with the hardtop off and hair flowing in the wind, it just might be N.  And she’ll be having “Fun, Fun, Fun.”  But, unlike the Beach Boys song, her daddy won’t ever be taking her T-Bird away.  I know.  I’m her daddy.