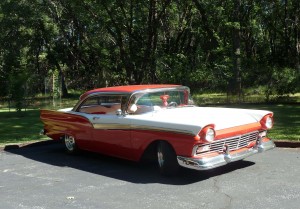 When Roamin Angel L found his ‘57 Ford Fairlane 500 in a field near the airport in 1988, it was not exactly ready to fly down the highway.  In fact, it didn’t even have an engine or trans.  The body was in rough condition and the interior was shot.  L says it was “destined for the junk yard.”  However, he had always liked the lines of the ‘57 Ford and, as a real Ford guy, was willing to do the work necessary to put the Fairlane back in the traffic lanes.  However, L keeps very busy, both on his own projects and those of his customers.  So the ‘57 sat in the back lot for seven years, covered by a tarp.  In fact, it was covered by three different tarps, each one replacing the other as its predecessor rotted away.  Finally, L had the time and motivation to restore the ‘57: the 1995 Americruise.  At the time, it was the premier hot rod cruise-in, organized by Rod & Custom magazine, and drew rodders from all over the nation to flood a car show in Lincoln, Nebraska.  Once L decided to take the Fairlane, he set to work in earnest    He dropped in a 351 CID Cleveland engine with a Ford top-loader four-speed trans.    It was the “4V” version of the 351, with the bigger valves and ports for better performance, and to get it and the headers to fit properly he had to recess the firewall.  For the front suspension, L chose a Fatman drop-spindle with disc brakes.  Power steering and brakes were added for easier driving.  After repairing the dings and dents on the body, he opted for an original-style red and white paint job.  He had the interior done in a nostalgia-style red and white naugahyde.   And he finished in time to join about 100 fellow Californian hot rods cruise along Highway 80 all the way to Nebraska without a hitch.  Pretty ambitious for a maiden flight.  While on the trip, he found that the lowered, softer suspension made for a very comfortable ride, but did have a problem: Taking the rolling dips along the highway at any speed caused the frame to scrape the highway, giving off a trail of sparks even though it caused no real damage.  He recalls flying down the highway alongside the legendary Boyd Coddington, who was driving a cherry ‘51 Ford Crestline with the same problem.  They cruised next to each other for quite a while, spewing sparks and grinning.  On the way back, L and another local car chose the scenic northern route, going up to Highway 90 and cruising back at their own pace in some beautiful country.  One big reason is that it “rides like a cloud.”  Although his wife loves riding in the ‘57 Ford, they have not taken this Ford on any long runs since.  And there is a reason: no air conditioning.  At the time he built it, L thought, “Air conditioning?  I never needed it when I was young, so I don’t need it now.”  He realizes that he’s not 16 anymore and that he drives in hotter climes when he cruises with his rods now.  He does have an extra dash that he plans to modify for air conditioning vents and swap with the one in the car now.  But he has a few rods that already have A/C and many other works in the mill, so it may be a while.  He says, “When you’ve got old cars, you’ve always got a project.”  However, if he ever gets around to climatizing the ‘57, expect to see it not only in the local flight paths, but on the long-range ones.