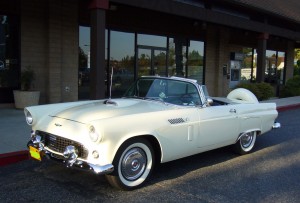 The 1956 T-Bird had similar styling to the 1955, but side vents, wind wings and a continental kit.

It would make a great story to say that K flew over to Hawaii and bought the car of his dreams.  As the old saying goes, close, but no cigar.  After selling his ‘55 T-Bird when he went into the Air Force, K regretted it.  About six years ago, he began to search for a small Bird, mainly on the Internet.  He found one in Kona, Hawaii, the big island.  By the pictures and description, it sounded like exactly what he wanted.  He chatted with the owner and all seemed right.  After flying over, cash for the purchase tucked in his money belt, he found that all that glitters in a description is not gold.  It had serious issues with dents and rust, plus it was only running on maybe six of its eight cylinders.  So K and his wife turned their trip into a vacation, checking out the lava fields and such, but brought home no car.   Then K’s daughter told him about a ‘56 in Sherman Oaks.  The on-line photos looked good, but Ken had been burned once.  Still, his daughter lived in SoCal, so he drove down.  It had power steering, brakes and seat, as well as an auto trans.  It even had the original Town and Country signal-seeking AM radio.  Although it did not have the removable hardtop, it did have a soft top in vinyl.  All in all, it was a great car.  So K bought it and drove it home.  The only major thing he has done since buying it is to replace the black upholstery with the original “tuxedo” black and white one and replace the convertible top with an original-type canvas one.  Since then, he has not regretted his purchase at all.  He drove it all the way to Coeur d’Alene, ID, with fellow Roamin Angels a few years ago, and it performed flawlessly.  So K has found that paradise is not always some tropical clime, but may be a great car closer to home.