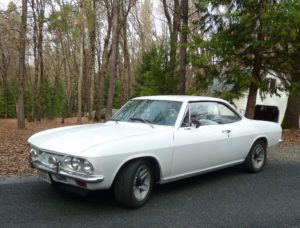 Don’t let the ‘110 HP’ emblem on the back deck and its quiet, smooth idle fool you. This is a Corvair that earns respect wherever it goes on it’s 15″ Camaro wheels.

About a year ago, John’s ’66 Corvair was featured in this column as a ‘work in progress.’ Now it is featured as a work completed. And a lot happened in that year.

John had already installed a 300 HP 5.3 liter mill from an ’04 Chevy pickup, using a now-unavailable kit designed to convert the pancake-six rear-engined Corvair into a mid-engine fire-breathing V-8. While doing so, he discovered the many inadequacies of the kit. John’s skills as a mechanic, fabricator and engineer were challenged many times in a project that, ‘the kit says you can do in forty hours. Maybe if you have ten people helping.’ And John did it almost all by himself, so do the multiplication for how many hours it took him.

Since the previous article covered the nightmares John encountered in mounting brackets, cooling system and such, this one will stick to new challenges John faced. One example of John’s ingenuity and skill is the ‘doghouse’ he built to cover the engine where it now replaces the back seat. He fashioned it from pre-painted aluminum sheets using borrowed break and shear. It looks like it was professionally made. Maybe even better. Another case in point is the gas tank. Originally, it was in the front trunk and had a filler door on the front fender. Since moving the engine from behind the rear axle to in front of it left an empty area where a front-engine car’s trunk is, John moved the gas tank to the rear and filled the old gas door so well that it is invisible. After doing all the rust repair and body work necessary to bring the almost half-century old body back into better-than-new condition, John painted it Summit White. Then came the interior.

Since John had installed a dash from a Corsa model, it had openings for a speedometer, tach and four other gauges. John decided he needed three more and, since he had decided to go without tunes, he fabricated a flat panel to fill the radio slot with three gauge openings. Then he hit another problem. The angle was all wrong for reading the gauges from the driver’s seat. So he remade it, this time tilted at an angle. John says, “One thing about doing a car like that is you’re always having to change things.” Then he painted all the interior metalwork. Next he installed new carpets and headliner. He opted for late-model Toyota seats since they fit the car and were much more comfortable than the stock ones. In place of the flimsy vinyl-covered cardboard door panels the car came with, John cut out aluminum ones and covered them with the original vinyl. Finally, he installed all new weatherstripping to keep out the water.

Although his Corvair is basically finished, there is one issue John plans to address. The car came with 3.55:1 rear end gears. With so much power in the light Corvair body, John would like taller gears to give better highway speed, like 3.08:1. They were made for Corvairs, but John found that they were part of a Federal economy testing program and never available for the public. However, there is now an aftermarket source. It will be a job to make the change, but that’s what hot rodding is all about. Meanwhile, John is enjoying his ‘killer’ Corvair.

Although he has only put on a couple hundred miles since he finished it, driving this Corvair is a blast. Things it doesn’t have, like heat, a/c and a radio, aren’t missed. Moving the engine forward from the original rear-mounted position gives better handling and the boost in horsepower ups performance dramatically. If Chevy had done this change themselves, we might still be seeing new Corvairs made. Instead, John is driving around in one of the very few ‘killer’ Corvairs on the road.