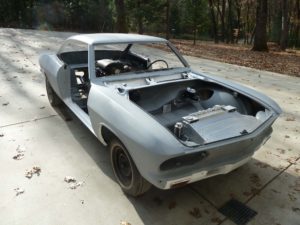 Although the body was essentially the same from 1965 to 1969, the introduction of the beefier Saginaw trans is what made possible converting to the V-8 that is nestled inside this Corvair. The radiator and shrouding now takes up much of the front trunk.

While some people might be satisfied with the stock flat six engine in their Corvair, John was not. He wanted a V-8. Now he’s well on the way to seeing his desire fulfilled.

It all started a couple of years ago when he heard of a ’65 Corvair for sale that included an unused Crown V-8 conversion kit from the ’60’s. John knew that it wouldn’t work in any Corvair older than 1966, but was willing to buy the car and use it for parts in order to get the ultra-rare kit. When he got it, he found it was a Corsa model with a performance instrumentation. Next came finding a car for the kit. Rather than tear apart one in good condition, John located a rough ’66 Corvair for a good price. The owner said it had ‘a couple of rusty spots.’ After he got it, John found he had to rebuild the windshield frame and door jambs as well as repair the rust under the vinyl roof. Chevy had done no real rust prevention on Corvairs and it showed. That was the easy part. He removed the engine and used the kit to alter the Saginaw 4-sp trans and the 3.55:1 differential to put the engine in front of them instead of behind. The only reason the engine can be mounted on the opposite side and everything still work is that the Covair six runs counter-clockwise instead of the conventional clockwise. During his work he discovered some of the kit had been designed by ‘Bubba,’ so he manufactured better parts for the problem ones. Since the stock engine was air-cooled, John had to create a front air intake and mount a Griffin four-core aluminum radiator in the front trunk, as well as plumb the cooling system by running stainless steel pipes through the floor in front of the engine and up to the radiator. The kit had shown the pipes running right through the car, which would not have looked too good. For the engine, he bought a 300 HP 5.3 liter mill from an ’04 Chevy pickup that came with the complete wiring harness and the computer. Rather than buy a wiring harness kit, he modified the stock one for his use. Now John can see the light of day on his project, but says the kit’s claim of it being a 40-hour job to install is a little off. “400, maybe,” he says. He’s glad he had some help in machining, welding and such from fellow Roamin Angels Larry, Don, Dennis, and Tom or it would have been even more. But some of the time might also be because John does meticulous work and is always improving the car. Like giving it four-wheel independent suspension and adding front disc brakes. Certain things John will not be adding, however. The radio opening will house more gauges and he’s not planning on heat or air conditioning. It’s not really a long-distance cruiser. Oddly enough, it will have cruise control since that is simple to hook up. So if you see a Corvair getting on the freeway ahead of you a few months from now and it seems like it has a lot more get-up-and-go than the 180 HP that the hottest flat-6 would have, it well might be John having his V-8.