Alexander Rossi and the Roamin Angels 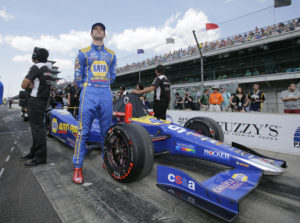 Back in 2008, Roamin Angels scholarship chairman Ron Nevis had a feeling that Alexander would go far in the racing sport. Because of Ron, Alexander received a scholarship for a year to help with his education. Although Alexander received a regular diploma from high school, he was often away and needed extra funding for course work. He attended a Roamin Angel breakfast, describing what it was like to be in racing. With great poise and presence, he gave a short talk and answered questions. Everyone was impressed, but probably no one expected him to be a winner of an Indy 500. Well, except Ron Nevis, who knew a winner when he saw one.? In a recent interview, Alexander talked about his history in racing and that impressive win in Indianapolis.

He started out when he was 10 years old and won his first championship then, racing go-carts that hit 60 mph. From there he moved into the Skip Barber Racing School Formula Championship series at 14 years old, placing first in the Western Region Series and third overall in the National Series in 2006. From there, he joined the Formula BMW team at 15 years old. When asked how he was accepted by older drivers on the team, Alexander responded,  It makes no difference. When you get in a race car, you’re just trying to win. It was irrelevant.

And win he did. He was Formula BMW Americas 1st Champion and Formula BMW World Champion in 2008. BMW Sauber F1 Team wanted him and it was through them that he took the test to become the youngest driver ever and the only American to hold a Formula One Super License. But all was not ideal. “BMW pulled out of the sport about two months after that,”  Alexander said.   ‘At the time I wasn’t racing Formula 1 anyway, so I went over to Europe and was racing GP3. GP3 follows the European portion of the Formula One series, giving drivers a chance to experience a Grand Prix-type race.  It was about a 2   year gap between getting my license and getting into an F1 car with Team Lotus (now Caterham),” he said. In 2014, he joined the Manor F1 Team (now the Manor Marussia F1 Team), where he is currently an official reserve driver.  “It’s a bit like being a second-string quarterback,” Alexander said.

So how did this F1 Driver living in London become part of the Andretti Autosport team in America? “In February of this year, I got a call asking if I’d be interested,” Alexander recalled.  I’d talked to him in 2015, but at the time I had every intention of racing Formula.  It was very fortuitous that he decided to join the four-car Andretti team. Although the Indy Series consists of 16 races, the Holy Grail is the Indy 500. While the fastest car and the best driver have the racer’s edge, as in a game of chess there is also a strategy to winning. “It’s a four-car team, so we work in conjunction with each other. We’re sharing information with each other,” Alexander said. “But once you get on track, it’s an individual fight.”

So, here was a driver who was younger than most who ever drove the Brickyard and here as a rookie. When asked it he felt he had a chance, Alexander said, “You enter every race expecting to win and I knew the car was good enough. That was the goal.” But Alexander and his team came up with a plan to win the race about half way through the race. He was able to avoid the last pit stop and save enough time to win. That involved not keeping the ‘pedal to the metal,’ easing up on the throttle a bit to conserve fuel. “It was more than a little bit,” he said. “We had a lot of pit stop issues, so it was the only way. We’d lost a lot of track position. The only way to gain that back was to make one less pit stop than everyone. In order to do that, we needed about 20 to 30 percent better fuel mileage than anyone else. I didn’t think it would be possible. We had to put our heads together and made it work.”  When asked who made the decision, Alexander answered, “It’s a huge team effort. We had eight people involved, seven engineers and myself.’ The decision was made about 250 miles into the race. In retrospect, it was a wise decision, but could have been disastrous. I ran out of gas on turn four of the final lap,” Rossi said. But he had enough of a lead to coast to victory, even if he did not know it at the time. “I didn’t realize I’d won until I saw there was no one else on my right. There was a lot of relief at that moment,” he said. When asked if he’d panicked when his engine died, Alexander said, “No, there’s not a lot of emotion when you’re driving a race car. You deal with the situation as it comes. That’s just how it happens.” For Alexander, it happened well.