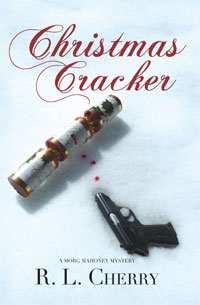 While private investigator (P. I.) Morgana (Morg) Mahoney carries a Colt .38 revolver in her purse, her sharp tongue and quick wit are just as lethal weapons. She and her filthy rich, drop-dead gorgeous friend, Heather, leave sunny Southern California for a manor house in northern England to celebrate Christmas.

What begins as a vacation, or holiday as they say in the British Isles, soon becomes a murder mystery laced with threads of local history, race horses, the IRA, family secrets, a touch of romance and, of course, pure greed.

In the land of Sherlock Holmes, Morg finds herself using some of the methods as that first consulting detective to solve the case. There is murder afoot and Morg is assisted by her Watson, her host, the venerable Lord Weston, and his trusty, rusty Land Rover as she tracks down her quarry. Although along the way she finds what it’s like to be a “stranger in a strange land” as she copes with a different culture and language quirks, she still is quite taken with the English and Irish people she encounters. At least most of them. After all, murder is murder, no matter what the accent.

I. Dance of the Sugar Plum Fairy

Exercising is a pain in the ass.  Any woman who says she likes it is crazy, lying, masochistic or some combination of the three.  I do it, work out that is, but I hate it.  I could claim that I exercise to keep in shape in case I ever have to kick some bad guy’s butt.  After all, it does take more than just putting “Private Investigator” on the door to be good at my job.  And since private investigators are normally men, a woman in the field needs every edge she can get. Read More…

Morg, prides herself on being tough. But she finds that her hard shell is vulnerable if she cares for someone too much. However, she also realizes she can’t live her life as a stoic. There is a time to love. And a time to mourn. It’s 1999 and Morg Mahoney has just graduated from college with a degree in Classics, which she feels qualifies her for jobs like a bank teller or a gas station cashier. When Joe Spector, a retired detective who’d been on the job with her now-deceased father that Morg calls Papa Joe, offers her a job as a private investigator, she jumps at it. Soon they become embroiled in a case that lands them smack dab in the middle of a scheme by the Mexican Mafia, La Eme. She gains a few friends and more enemies as she solves the case, while suffering a tragic loss. Fifteen years later, Morg gets an early-morning call from her filthy-rich best friend, Heather Pierce. Heather’s sorority sister’s fiancé has disappeared on the night before their wedding. Morg drives up to Lake Tahoe to help, only to become the target of a sociopathic murderer. With a tip of the fedora to Dashiell Hammett’s The Maltese Falcon, the story even includes a Sam Spade who helps Morg at key moments.

I. A Reasonable Amount of Trouble

I was putting Madame Bovary on a sagging, pine shelf in the “Classics” section of Penny’s Pre-owned Publications in sunny San Berdoo when I sensed him behind me. I knew he was close because I could smell his garlicky breath. Even the moldy works of Molière on the shelf at my nose level, a sanctuary for a horde of dust mites, could not mask his approach. I’d seen him devour two Big Macs and fries for lunch not long before that didn’t have any garlic, so the odor was probably because he hadn’t brushed his teeth in a while.  Read more . . . 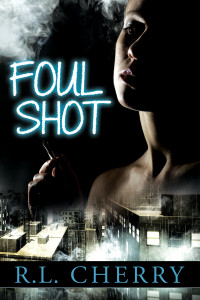 Chicago Police detective Vince Bonelli’s life had been organized and comfortable when sexy Gina Gallo blew into it.  Like a whirlwind, she changed everything, destroying parts of Vince’s life as she drew him close to her.  Yet, while physical intimacy was not a problem for her, she would not let Vince past her mental and emotional barricades.  The question is will they survive the devils of Gina’s past and of Vince’s present?   While Vince was a cop, it is not a cop story.  While there is mystery, it is not a mystery.  While there is romance, it is not a romance.  Part suspense and part drama, Foul Shot describes how Vince found that, while his life after meeting Gina was never dull, it was often traumatic and sometimes deadly.

As Chicago Police detective Vince Bonelli picked up his gun and his star from the dresser, his girlfriend Gina came up behind him and wrapped her arms around his waist.  She rested her head against his shoulder.  “Maybe you should cancel.”

He stopped and turned to her, breaking her embrace.  “Why?”

Gina brushed her short, black hair from around her face.  “I don’t know.  I don’t trust Frank Calmonico.” Read more…

Three Legs of the Cauldron 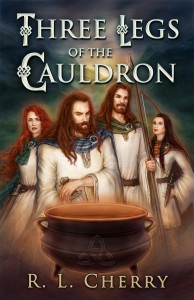 Fergus, the aging chief of his clan in late 6th century Ireland, has three sons: the manipulative Ciaran, the bold warrior Cathal, and the impetuous Connaire. When Ciaran tries to separate Cathal from his beloved woman-warrior Aislinn, Cathal turns to Connaire for help in thwarting Ciarin’s plan, while not betraying any of the three foundations of their society, the three legs of the cauldron. It is an epic tale that spans the Irish Sea and encompasses the turbulent times in ancient Dal Riata, the kingdom that had holdings in the north of Ireland and the rugged western coast of Scotland. Saint Columba as well as Conall and Aeden, two kings of Dal Riata in that era, are only three of the historical figures who play strong roles in Three Legs of the Cauldron.

Travel back in time to an era when truth was more important than fame, when honor outranked money and when duty mattered more than life itself.

Excerpt from Three Legs of the Cauldron

I. FROM EIREANN TO ALBA
Chapter 1

With no moon penetrating the storm clouds, Ronan steered the currach across the sea by instinct alone, heading to where he felt the sun would rise. The rowers determinedly plied their oars to keep the craft steadily moving toward their goal, the land of Alba. Cathal, the man they had all followed on this journey across the sea, came to him, doubt in his voice.

“With no stars, how do you know we are on the right course?”

“I just know,” Ronan said with more confidence than he felt. Read more . . .

The quaint Gold Rush town of Buggy Springs was a wild and woolly city in the mid-1800’s, but had become an eclectic and easy‑going place by the 21st century.  At least that’s what Father Robert Bruce of St. Nicholas of Myrna Episcopal Church thought.  Then a mysterious, anonymous caller who claims to want to make a confession quotes Scripture and gives a riddle.  Father Robert soon realizes it’s about a murder.  As he starts to investigate, he soon finds that there is far more dirt than gold in them thar hills.  He discovers a hard‑drinking, drug‑using, wild‑living side of his town he never knew.  Being a young, handsome and single male, he finds some of the women to be more than friendly, but strives to keep his them at arm’s length.  Literally.  He is warned that some secrets are best left alone, but he can’t.  Buggy Springs is his home and he can’t let any murder go unsolved, especially when the victim is from his parish.  With the help of the local chief of police, the Chief, and P.I. Morg Mahoney from Southern California, he digs deep into the past of the citizens of Buggy Springs and finds more than a few surprises.

Excerpt from The St. Nicholas Murders

Sometimes little things we do, or don’t do, lead to events in our lives that can have grave consequences for others.  When I answered the phone on that November Saturday, I had no idea of the twisted tale that would follow.

“St. Nicholas of Myra Church, Father Bruce speaking.  How may I help you?”

A low, throaty voice whispered, “Bless me, for I have sinned.”  Read more