My latest book, The St. Nicholas Murders, is now available on Amazon.  It’s a bit of murder in the Foothills for Christmas.  The book is a cozy mystery, meaning there is no foul language, explicit sex or graphic violence.  Something to read in your rocker with a nice fire in the fireplace on a cold night.  Cozy, right?  It starts just before the Kirkin’ of the Tartan service at Father Robert Bruce’s church, St. Nicholas of Myra Episcopal Church in Buggy Springs, a small town in the Sierra Nevada Foothills.  It ends on Christmas Day.  I filled it with characters and places inspired by living in a small town in the Sierra Nevada Foothills for 19 years.  It is fiction, but fiction should come from real life.  For a sampling of the book, click here. If you like what you read here, click on the Amazon link on the sidebar.  If you don’t like what you read, then don’t click.  It’s your choice, but I hope that you will give Father Robert a chance.

Doubting the existence of Santa is not new.  On September 21, 1897, the editor of The New York Sun newspaper published a reply to a letter from a an 8 year-old girl that has become a classic.  In it, he gives that famous line, “Yes, Virginia, there is a Santa Claus.”  Now I am here to say, “I believe in Santa Claus.”  (click here for the entire article)  He also wrote, “The most real things in the world are those that neither children nor men can see.”  Maybe part of the reason is that I am Santa Claus, to give the children a Santa to see.  Well, not all year, but a few special occasions each year.  But more on that later.  Let’s talk a little about who Santa Claus is. 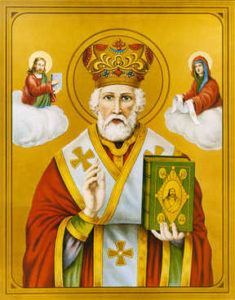 St. Nicholas of Myra with a white beard and the red attire of a bishop

Being in love with history, I am compelled to give a little history of the old fellow.  The name Santa Claus is derived from the Dutch Sinterklaas (click here for more), a red-cloaked bishop with white hair and beard who brings gifts to good children on the eve of St. Nicholas’ Day, December 6th.  His name comes from Saint Nicholas, the Greek Bishop of Myra (now in Turkey), who was known for his generosity (click here for more).  Early on, gifts were given to children in some countries on St. Nicholas Day, not on Christmas Day.  From Jolly Olde England came Father Christmas.  As early as the 1400’s, King Christmas would ride in the Christmas festival on a decorated horse.  Remember, Christmas trees were not a part of the English Christmas celebration until German Prince Albert brought them across the Channel when he married Queen Victoria (although they had been a part of the Royal Family’s since the time of George III), so decorating a horse had to do.  Over time, he also became known as Father Christmas, an old man in a long, fur-trimmed cloak.  However, King Christmas was known for bringing fine food and drink to the Christmas celebration, lots of it, rather than toys for children. 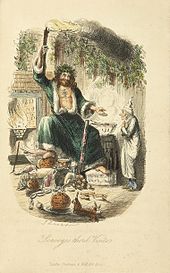 When the Puritans took control of England in the mid-17th century and banned the celebration of holidays, originally Holy Days, by anything but church attendance, Father Christmas was a casualty.  He also became a cause célèbre for the Royalists who longed for a return to the wilder, less restrictive days of the Stuart kings.  After the Restoration, when Charles II regained the throne, poor Father Christmas had served his purpose and was almost forgotten.  However, in the Victorian Age, he returned to prominence as the spirit of Christmas.  In fact, the Ghost of Christmas Present in Charles Dickens’ A Christmas Carol is a version of Father Christmas, dispensing Christmas cheer from his torch.  Check out the movie version with George C. Scott for a great example of how he looked to the English of that era (more on that and other versions of the movie here). But how did he join with Sinterklaas to become Santa Claus?  That’s an American tale. 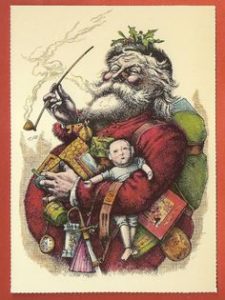 When Clement Moore’s (click here for author dispute)  “A Visit from St. Nicholas” (also known as “Twas the Night Before Christmas”) was published in 1823, it created much of the mythos.  (click here for the entire poem)  This was the first time we have a sleigh with the reindeer numerated and named.  St. Nicholas is dressed in fur (not red, though) and comes down the chimney to fill stockings.  While much of this is in the Dutch tradition, he does his good work on Christmas Eve or early that morning, not on St. Nicholas Day!  Next came Thomas Nast’s drawings that appeared in Harper’s Weekly from 1863 through 1886.   Nast is best known for creating the elephant as the symbol of the Republican Party and the donkey for the Democrats, but also did Santa.  His elaborate drawing of “Santa Claus and His Works,” was included in an 1869 printing of “A Visit from St. Nicholas” and gave Santa his now-traditional red attire.  St. Nicholas had become Santa Claus.  Nast also gave us Santa’s home in the North Pole that he termed “Santa Claussville, N.P.”  and evolved Santa from a short elf into a full-grown man.  The drawing of Santa he did in 1881 is much like the current standard concept of Santa, except for the politically incorrect pipe.  Thank you, Thomas, for giving us our Santa. 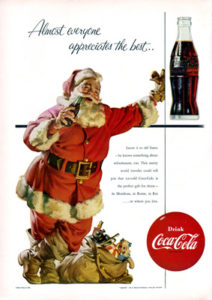 In the movie “Miracle on 34th Street,” the young Alfred says, “there’s a lot of bad ‘isms’ floatin’ around this world, but one of the worst is commercialism.”  Yet, it is a commercial ad campaign that refined our image of Santa Claus.  Nast’s Santa looks dated to us now, too 19th century.  It was Coca Cola that gave us the 20th century version that we still identify as the real Santa.  Although Coca Cola began using Santa in its ad campaigns in the 1920’s, it was Haddon Sundblom who drew the ones in the 1930’s until the 1960’s that we now consider the real Santa.  Since Santa didn’t and wouldn’t get any residuals from his images, the jolly old elf was the perfect promoter for Coke.  Still, we do get to enjoy the art and Haddon’s images are our image of Santa to this day, so that wasn’t all bad.  (click here for the Coca Cola Santa story)

So what about me being Santa?  I believed in Santa as a child.  When I found that he was my dad, it didn’t damage my psyche.  I appreciated the magic that my parents gave me at Christmas, how they made the holiday even more special.  Since Christmas is about God’s gift of his Son as a child to mankind, isn’t there something appropriate about having a saint’s namesake bring gifts to children?  Even the idea of naughty and nice lists teaches accountability for our actions. I still believe in Santa.  In the mid-1970’s, my parents gave me a Santa suit for Christmas.  It was not an expensive one and they did so more as a joke, but it began a change in my life.  I wore it to our towing company Christmas party at a local restaurant, kidding around with the office staff and the drivers.  One of the drivers was sitting on my knee, telling me what he wanted for Christmas, when a waiter came up and told me a little boy would like to talk to Santa.  I went over to his table and took him on my knee.  As he told me of his Christmas wishes, it all changed.  It was no longer a joke.  I was taking on the mantle.  Since then, I have been Santa for many children, including my own daughter.  I only hope I have given as much joy to them as they have given to me. 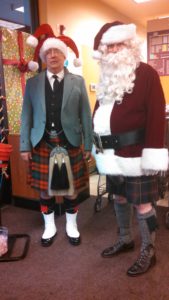 I have also appeared as Santa MacClaus, ringing the bell for the Salvation Army at Christmas.  The response has been great.  Seeing people laugh at the Scottish Santa and contribute to help others at Christmas is wonderful.  Having the kids, eyes going wide to see Santa in a kilt, is hilarious.  Interestingly, none of the kids have a problem with that,  Santa is Santa no matter what.  And the cause is great for Claus.  All the money we raise goes to help others in our local community, whether it be for toys and clothes at Christmas or to keep the homeless from freezing to death in cold weather, it’s worth a little of my time.  Plus I love being Santa, bringing joy where I can.  I will keep doing it as long as I am able.  After all, I believe in Santa.