If you are a Monty Python fan, you’ll recognize the title as announcing a zany, crazy, insane, wild, completely nutso and/or witty bit.  Remember the “Dead Parrot” and the “French Subtitled Film” sketches?  If you are not a Monty Python fan, then God have mercy on your soul.  Unless you are a Groucho Marx fan, especially of his early movies like The Cocoanuts, Animal Crackers, Monkey Business, Horse Feathers, Duck Soup, and A Night at the Opera.  If you are, then your sin is forgiven.  Just this one, though.  For the rest, you’ll have to talk to God.

Ralph Waldo Emerson once wrote that “A foolish consistency is the hobgoblin of little minds.”  My mind wanders through many mazes.  Come down the rabbit hole with me.  Click on your choice and fasten your safety belt.

Toast to the Lassies
On or about the 25th of every January, Scots, those of Scottish descent and anyone else brave enough to be in a room full of wild Celts gather to honor Robert (Rabbie) Burns, the national poet of Scotland.  Since 1801, they have gotten together to read Burns’ poems like Auld Lang Syne and Address to a Haggis, give speeches about him and give toasts to Rabbie, to the lassies and to the laddies.  Here is one I gave at a Burns Supper in 2012.  Click here to see a Toast to the Lassies

Pun-ishing Humor
Samuel Johnson once bemoaned that puns are “the lowest form of humour,” but I love them.  Then he also said, “Scotland is a vile country, though God made it, but we must remember that he made it for Scotsmen, and comparisons are odious, but God also made Hell.”  Being both a punster and part Scottish, I don’t give much credence to what he said.  So here goes for a page or two of puns.  There will be themes.  Send me your best original effort and I will post it if I like it.  I am judge, jury and executioner.  You will receive credit for your contribution and my hearty thanks, but nothing more.

Dis Be De Puns
I did these with my friend Rich, who I promised not to mention by name.  Guess I just blew that one. The prefixes dis- and de- can have multiple meanings.  Displaced means to move something from the place it is occupying.  But couldn’t displaced mean to take away an Olympic medal bronze medal for placing third?  This may be ground-breaking since I am not aware of any formal (if that’s the right word) term for this type of pun.  Any ideas for one?  Let’s see how many puns based on dis- and de- can be made. Read on… 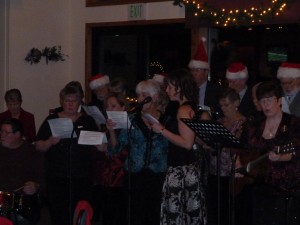 Why did I start rewriting Christmas songs? The Roamin Angels Car Club has had an annual Christmas party for at least the twelve years I have been a member. My musician wife, Kelly, decided to organize the Choir of Angels to sing a few Christmas carols and songs at the opening of the party ten years ago. I decided the songs should be modified, altered and hopped-up to fit the crowd. After all, getting a bunch of car guys to sing with their wives would be a lot easier if the songs were “cooler.” And that’s how it all began. So now we have about twenty such songs in our repertoire. Some aren’t really “Chistmassy,” but all are to the tune of a Christmas song. So take a joy ride by clicking HERE.