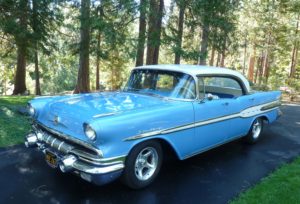 The list of who helped on Project Pontiac is far too long to name here, but go to Diane’s website on her car. It could be titled, “I get by with a little help from my friends.”

For lovers of hot rods and collectible cars, every car has a story. Such is the case for 20-year Roamin Angel newsletter editor Diane B’s ‘57 four-door hardtop Pontiac Star Chief. You can see the car up front and personal in the Artisan Faire building at the car show on September 10th and 11th at the Nevada County Fairgrounds in Grass Valley. For a detailed description of the restoration, go to http://1957pontiacstarchief.com/pontiac-project-progress/ For the back story, keep reading.
It all started with Diane wanting something special for her 50th birthday in 2006. Having been bitten by the car bug after hanging around with Roamin Angels for 10 years, she decided she wanted a ‘57 Pontiac like her parents had owned many years before. She found one in Maryland. Although she had pictures of the car from the owner and her cousin from New Jersey, she admitted that she paid far too much. Caught up with buyer’s frenzy and excited that it seemed the car she wanted, she bought it and had it hauled out to California. It sat for a while, until Roamin Angel Wayne D approached her and said he and some other Angels wanted to rebuild it for her. “I said, no,” she recalled. “I wanted to do it myself, even if it took 20 years. I wanted to learn.” However, time kept passing with no progress and Wayne returned with fellow Angels Larry E and Ron O in 2009, saying, “We want to work on your car. Not the car you have, but a better one we found.” They had taken a closer look at Diane’s ‘57 Pontiac and found so much rust, known to gearheads as cancer, that they knew it would cost a fortune to repair. So they took Diane to see another ‘57 Pontiac.
The car was sitting in a field in Wilton, but the drier California climate had been kinder. It had minimal rust, plus it was a complete car with factory power steering. Not only that, the price was a fraction of what Diane had paid for the other Pontiac, so she bought it. The Angels persisted on helping on the restoration. “They wore me down,” she said. “I finally agreed but insisted that they would let me help. ‘Yeah, yeah,’ they said.” Her Pontiac went to Angel Bob M’s house, and he became crew chief with Ron. The “new” Pontiac still needed a lot of work, much of it from sitting for so many years. “They started by taking out 3 lbs. Of rat turds,” Diane said. The original idea had not been to restore the car, but, Diane said, “To slap a paint job on and get the engine running so I could drive it. But the guys kept saying, ‘We can’t leave it like that because it’s not safe for Diane to drive.’” So the body was stripped down to bare metal and repaired. The frame was cleaned up and all suspension rebuilt. The engine and trans were also gone through, made as good as new, or better. The entire car was rewired. The problem was it all cost money.
Even though so much of the labor was free, parts are expensive. And the costs kept rising. “Guys, I just don’t have the money,” Diane told them. First, Diane took a few parts off the “old” ‘57 Pontiac and sold it, but not for much. Next they came up with yard sales. Diane held two of them with the help of Roamin Angel women. They did well and all the money was plugged back into Pontiac parts. A group of gearheads who meet at the Old Town Café in Grass Valley passed the hat and came up with about a grand for the project. There was a money-saver didn’t work out quite as well as expected. The guys arranged to have the now-defunct Wyotech in Sacramento do all of the upholstery as a training project at no cost to Diane. The problem was that the instructor did not have completion as a priority, so Diane to keep checking on the car’s progress. The instructor had grandiose plans for unimportant areas, like the trunk, but progress was slow. Not only that, small parts kept disappearing. Finding parts for a ‘57 Pontiac is not easy. After about 2 years, they finished. Although not done to factory specs, the interior did turn out well.
During all this, Diane kept wanting to do something herself. “Take pictures,” they told her. “I was my car’s paparazzi,” Diane said with a laugh. “Finally, they let me sand a little of the left front fender. After a few minutes, they said, ‘You’re done.’ I realized I wouldn’t get to do any more, but I did do 10 minutes of sanding.” But she kept taking pictures.
Diane’s car is not a restoration in the sense that everything was done to make it exactly like it was when it rolled off the showroom floor. Besides the custom interior, the exterior colors (Chalet Blue and Kenya Ivory) are from 1960 rather than 1957. But husband Dave had few demands except that the car not be painted in original “baby-puke green.” It has aftermarket air conditioning, front power disc brakes and an AM/FM/CD stereo. But it still has the original 347 CID engine, which often is tossed away for a hotter one by hot rodders. And Diane is very pleased. “It has been an amazing journey,” she said. “I realized the artistry of these men. They are artists.” It is not a museum piece, but a car that is driven and enjoyed. “Driving it is one of my favorite things in the world,” she said. So when you go to the Roamin Angel “Cruisin’ the Pines” Car Show and see hundreds of amazing cars, realize that each has a story. Many were project cars that started as a short story, but then became an epic novel. Their tales are worth hearing