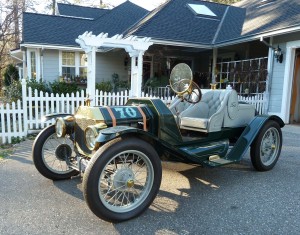 The number “70″ was assigned to the Speedster at its first race and T kept it. The monocle windshield is absolutely worthless, but looks great. T describes driving it as like an early motorcycle: windy, no seat belts, rough riding and a handful to control.

Back in the early days of auto racing, Model T Speedsters were popular in racing.  In thosedays of dirt race tracks, often at fairgrounds, the Model T offered an inexpensive way to get into the sport.  However, Henry Ford never manufactured that body style.  Racers would modify Model T’s by chopping off parts of the body and souping up the engine.  So when T decided to build one from a collection of parts in 1976, he was in the tradition of the original speedster builders.  A friend of his had built several of them over the years and urged T to build his own.  The 1914 era engine and transmission had been salvaged from a rip saw where it had been cutting trees into lumber for many years.  He built the frame for it, then added all the brakes, steering, suspension and such from his collected parts.  He used wire spoke wheels from a ‘26 Model T since the wood spokes of a ‘14 could be considered hazardous to the health of a race car driver.  For more power, he used a Ricardo high compression head (boosting it to maybe 5 to 1), a Zenith updraft carb, Bosch ignition and a 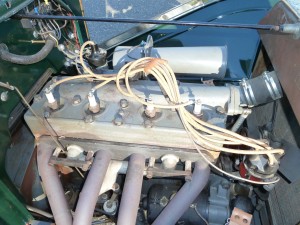 While the little Model T four-banger may not have been a powerhouse, it was durable, as evinced by how many are still around. They were so plentiful that many aftermarket parts were made to give them a little more oomph.

custom-made exhaust header.  Top speed was increased by using a Ruckstell two-speed rear end.  These type of improvements were often used by racers in the early part of the twentieth century.  He also added a water pump and starter (not available until 1918).  Since the internal brake in the transmission would quickly fade under strenuous use, T added Rocky Mountain Brakes, which are external bands on the rear wheels.  While they can lock the rear wheels, they won’t exactly stop the car on a dime.  Or even a dollar.  For the body, he bought reproduction a gas tank, fenders seat buckets hood and monocle windshield.  While the Rustoleum-white speedster may not have been the prettiest one on the road, T got it done in time to run it in the 200 mile antique car race in San Jose in 1977 with his son as co-pilot.  When he ran again in 1978 with wife S beside him, he won first place.  While 200 miles may not seem much for modern cars, in the speedster, with a top speed of about 45 MPH, sitting exposed and manhandling the car around the curves, it is a long and tiring race.  And T and S have run in about twenty of them, winning a number of times.  In 1995 Thane redid the speedster’s paint and upholstery.  It started when he had the seats redone in gray leather.  He decided it needed a different color of paint, so he sprayed it in British racing green.  A friend pinstriped it and painted on its number 70.  Since then, he ran twice more in the San Jose race. Although T and S have not taken it out very often since moving to the Foothills, he does enjoy driving it around occasionally.  And if the Fairgrounds ever opens up a dirt race for antique race cars, you can be sure that T and S will be out there, doing a Barney Oldfield and taking the gold.

One thought on “Dirt Track Speedster”