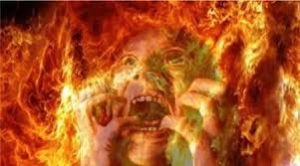 I have to move again?  I’ll just stay here.

When we moved recently from California, it was the move from hell.  Although I am no longer a fan of California, I’m not saying it’s hell.  Well, maybe not exactly hell, but  . . . let’s not go there.  No, I’m referring to the experience of moving.  Twice in less than a year.  That was hell.

Some time back, I heard that moving is one of the top ten stressful experiences.  While I could find no study that backed that up, I did find ones that put it at number 20 and number 32.  It is, of course, a subjective number.  For some, it’s a bi-annual jaunt, nothing of any great consequence.  However, when you’ve lived 18 1/2 years in a house, it’s an arduous task.  First, you’ve accumulated a lot of stuff.  Since we had plenty of storage, we would just stash things away rather than evaluate, “Is this really something worth keeping?”  Yes, sometimes is was not junk, but not something we would ever use again.  So we saved it.  Other times, it was sort of junk.  And we saved it.  To be clear, I’m not talking about stacks of newspapers and old magazines, but more like 15 year-old receipts for tax returns and books we would never read again.  With a two-story library, having over 6000 books with tons of bookends and mementos was, well, cool.  Until we moved.  Second, no two houses are the same.  Even though we were not downsizing, the layout was not the same.  Having done several remodels over the years, the house where we lived, while not perfect, was pretty dang close.  And all our furnishings fit perfectly.  Not so the “new” house.  So we purged like mad.  We gave to the Salvation Army, Habitat for Humanity’s Restore and the local library (who got about a third of our books for their money-raising sale).  Boxes and boxes and boxes of stuff.  Big boxes.  We sold things that we’d stored since moving there almost two decades before and never used.

We tried to sell some nice antiques, but I found Millennials aren’t interested in “old junk.”  I took pickup loads of other stuff to the dump.  But not enough, we found when we finally did move.

The moving itself was a disaster.  There were not a lot of local companies in our small town.  Even fewer that could handle a move so large.  Like two.  One was not available as soon as we needed to move.  Ernie’s Red Ball Express in Grass Valley was the only choice. So we signed a hefty contract with them.  The plan was to pack for two days, load for two days, drive the less than 100 miles to the “new house,” then unload for two days.  On the first day of packing, I was handed an inventory form to sign before they would start.  It was pages long.  I quickly signed without fully reading each item.  What I didn’t realize was that their evaluator had marked many items with far more scratches, etc., than the items had.  Lesson: even if people are waiting, read EVERYTHING. 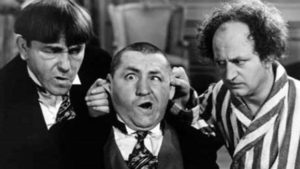 All boxes were to be tagged with a number and labeled as to what was inside.The first day, the three men didn’t even finish the library.  In a panic, the company sent out seven men the next two days.  While I tried to keep track of what they were doing, it was impossible.  After the trucks were loaded, I was to meet them at our destination the next morning.  I tried to keep track with the “bingo cards” that listed the numbers of 605 items as they unloaded so I could tell them where to take each box or item as it left the truck.  Unfortunately, not all boxes were labelled with what was inside or even had a number.  Some of the unloaders were unhappy that I wanted to open the boxes so that they went to the right room (important in a two-story house with heavy boxes being unloaded), so they would just put them wherever they wanted.  A surly one refused to cooperate at all.  But we were finally moved.

Let’s talk damage.  There was a lot.  I guess I shouldn’t complain.  A friend of mine had the moving van roll over en route and pretty much destroy everything, so I paid extra for more coverage.  If you’re moving, be aware all that is normally provided is a maximum of $.60 per pound.  Think of that.  A valuable table that weighs say 20 lbs. is only worth $12!  I had full value insurance with no deductible.  I recommend that, if your mover has that option.  Not all do.  We listed five items of above-average value.  Two were damaged, one of them destroyed.  I saw a two-hundred year-old Georgian card table come out in pieces.  As we later unpacked, we found 23 items seriously damaged or destroyed and two, a valuable knife and a tactical flashlight, missing.  An interesting later discovery was our Amazon Fire TV stick, that we couldn’t find and replaced, had a new home.  A couple of months ago, we noticed a charge from Amazon on our account.  I called them and was told it was for premium channels.  I told them I never authorized that.  They told me I had watched “Frozen” the night before in my house in Yuba City, CA.  I told them I did not then and never had lived in Yuba City, plus I didn’t even like “Frozen!”  Obviously, it had been stolen in the move.  They immediately cut off service to the “missing” Fire stick.  If not for the thief adding charges to my account for the stolen Fire stick, I might have thought the little device merely misplaced.  I let the person who answered the phone at Ernie’s know the story, but never heard back.  Ah, well.  For more about this move, go to my Yelp evaluation here.  We only unpacked maybe a third of the move, but I had to file the claim at that point.  We had 180 days to file the claim, but another matter made it a rush to file.  That follows below.

You see, once our house went into escrow, we went actively looking in our new location.  Although we finally settled on a house and went into escrow, on reconsideration there were too many negatives, so we dropped the escrow.  That put us in a near panic.  We had to move and had no house.  I mean, we couldn’t live out of our car with a whole household of goods in a trailer towed behind.  So we bought in haste. Don’t get me wrong.  It was a nice house and had an incredible view of the city.  But it wasn’t us.  We don’t have a formal life style.  It had a formal living room and dining room.  The entire main level floor was travertine marble.  Pretty, but cold and formal.  The rooms were, of course, totally different from our previous home and lacking in serious space where we needed it most.  There was no place for a large library, no pantry, no beautiful built-in cabinetry for the TV and DVDs.  Then there was the matter of my cars and shop.  With two garages and a separate workshop, I had plenty of room for our two “civilian” cars as well my 3 classics cars and huge collection of tools.  Not so the “new” place.  The three-car garage barely qualified as a garage, much less a shop. So it was filled with boxes around my two old Vettes.  I also rented a storage space for the rest of my shop equipment and my old T-Bird.  Sure, I could sell one or two, but I’ve owned them from 21 years up to 45 years and lovingly restored them from junkers with blood (from smashed knuckles), sweat (from working in hot garages) and tears (from the costs involved).  I mean, it would be like selling off a child!  With less than 1/3 of an acre and an active homeowner’s association, I had no hope of expansion.  My plan was to put in a lift that would handle the Vettes and let me park our other two cars in the garage, but there would still be no decent shop.  The great view itself harbored another problem.  Although not right in the city, a busy road was down the hill.  At night, periodically a “crotch rocket” would scream up the hill, wound tight and loud.  It seemed like one in the morning was a favorite starting time, followed by regular intervals.  It would wake me and I would maybe catch sleep at ten or fifteen minute snatches as the bikes played Ricky Racers the rest of the morning.  The morning sun from the east-facing window I planned to block with black-out drapes, but the noise was unsolvable.  Like I said, buy in haste.  However, we did not repent at leisure.  We did so quickly.  Within a couple of months, we knew we would move again.  And we did, within four months. 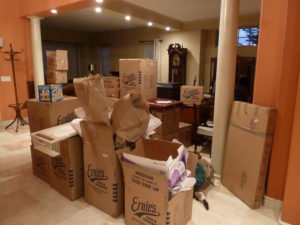 Moving damage the second time was minimal, nothing serious.  A lot of boxes were still packed and I moved what I could myself (with hired help) before hiring a company for the heavy stuff.  Although the Atlas Van Lines policy from the first move stated the damaged items could not be moved, the insurance company paid almost everything I requested.  Fortunately, I had taken date-stamped pictures before the second move.  And I guess they felt sorry for me.

Where we live now is very quiet, on an acre and has plenty of room for our stuff, my cars and even for a workshop.  It is not formal, but very comfortable.  Sure, there are things I’m changing, making more what we like, and it may never be ideal.  But it feels like home.  And I might even be unpacked by the end of the year.  Maybe.  If I’m lucky.  So now perhaps you understand why I have not posted an entry on my blog for some time.